Three must-have qualities of a representative of the people

The worst thing for an elected representative is failing to keep a promise, says Nguyen Minh Duc, a candidate running for the Hanoi People's Council in 2021-26 term.

As one of the candidates standing for election to the Hanoi People’s Council for the 2021-2026 term, Editor-in-Chief of Economic & Urban Newspaper Nguyen Minh Duc shares with The Hanoi Times his view on the role and responsibilities of an elected representative ahead of the upcoming general election.

Having been a deputy for the 15th Hanoi People’s Council term 2016-2021, you have now been nominated to run for Hanoi People's Council elections in the next five-year term. What do you think about the preparation process for the general elections?

This is a huge honor for me, but also a responsibility as a representative of the press community to join an elected legislative body.

Over the past 35 years of studying and working in Hanoi, I have had a long time working for a press organ and an elected body so I understand clearly the desires of voters and also the responsibilities of a People’s Council deputy.

The past five years working as a deputy of the Hanoi People’s Council helped me to access information on every socio-economic aspect of Hanoi and what is going on with the current living conditions of the locals. All preparation processes for this important event have nearly been completed, and all that left is for voters to cast their ballots responsibly.

Looking back on this term, what were your contributions as a representative of the people?

I was a member of the Urban Committee under the Hanoi People’s Council for the 2016-2021 term. During that time, my focus was to study and refer concerns from the people to authorities on issues related to legal framework and policies, aiming to further support the capital city’s socio-economic development.

Another key task was to take care of the people’s petitions and ensure they would be properly dealt with by the authorities.

During meeting sessions of the Hanoi People’s Council, I gave suggestions and opinions on matters of public concern. Of course, there remain issues that were not properly addressed in the past five years, but hopefully if elected, I will continue to realize the role of an elected representative for the benefit of the people.

What were the main issues that you focused on in your current term?

The more I am engaged with the people, the more issues I understand that they need taken care of. However, in order to deal with them substantially, it takes time and the response of the entire political system.

I focused on urban issues, one of those, the Ring Road No.3 in Linh Dam which was not constructed as in the master plan, causing traffic disruption for a long period. After having voiced concern over this issue, the city decided to invest in and upgrade this road to ensure smooth traffic.

I was very happy that the city also took into consideration the issues related to the Red River zoning plan. And recently, the Standing Committee of the city’s Party Committee approved the plan, which is expected to change the architectural face of the city and improve the quality of living standards of the people living along the riversides.

What is your plan if you are elected for the next term?

I would continue to raise issues that are of the interests of the voters, in turn contributing to the urban development of Hanoi into a modern and worth-living city.

My agenda would include protecting the rights of people living in apartment blocks that in the past had often been ignored by project owners. The second issue is the repairs of old apartment buildings, for which more policies are needed to facilitate the renovation of thousands of these old buildings in Hanoi.

Last but not least is environmental protection. The city is in need of solutions to improve air quality and control carbon emissions to create a healthy environment for the people.

What do you think about the responsibilities of an elected representative?

In previous meetings with voters in Hanoi, I see they have deep knowledge and understanding of various issues. Hanoi as a political-administrative hub of the country requires elected representatives not only to maintain a close bond with the people but also have the experience, intelligence, and the right mindset to fulfill their responsibilities.

The worst thing for an elected representative is failing to keep a promise, therefore, I will try my best to deserve voters’ confidence. For me personally, I will do my utmost on things that I promise, and not just telling the words.

Your agenda is related to hot issues of the city. Are you afraid to go against the interest of certain agencies or enterprises?

I will not hesitate to voice the desires of the people and join them in building a modern and civilized Hanoi.

It is normal that my opinions may not benefit certain groups of people, but my message is that it is for the common goals and the benefit of the community, not for personal gain.

From your perspective, what makes a good representative of elected bodies?

My methods are to follow the principles of staying in touch with the people, studying things from a scientific view, and delving into an issue.

In my view, I need to choose issues that are of interest to the community. Moreover, I have to study the issue thoroughly to present it before competent authorities and convince them to accept changes.

The most important thing is that an elected representative should stay focused on matters that are attached to the rights and benefits of the people.

What do you think about the impacts of the Covid-19 pandemic on the election?

I believe in the strong efforts of the government and the awareness of the public against the pandemic. In this context, the authorities have been preparing plans to ensure safety for the community during the election day.

As a candidate, I have been supported in drafting my action plan, meeting voters, and looking for information on socio-economic aspects of the locality where I’m running to represent.

In addition to face-to-face meetings, I was able to meet and discuss my view on a variety of issues with voters online. I think this is a flexible approach during the current situation. 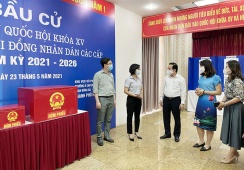 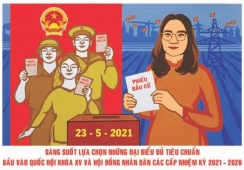 Hanoi committed to successfully hosting general election on May 23