There are many powerful nations in the world but not many capitals has a long history and rich culture as Hanoi.

For some reason at this special time, some sentences of a poem recite in me:

¨Looking back to the past, looking forward to tomorrow

Now looking up at the bright fireworks in the sky in the New Year's Eve, why does the name Thang Long bring a lot of thoughts? What made our forefathers choose this place as the capital of the country for over a thousand years? And why during that long history, Thang Long - Hanoi has always been considered as the origin that every Vietnamese remember wherever they go?

The feeling was so strong that a general, poet Huynh Van Nghe (1914-1977) who had never set his foot in Thang Long still had the nostalgia for it during the days of living and fighting against the enemy in other part of the country, bringing his immortal poetry:

"From the first day bringing the sword to save the country

Living in the South but missing Thang Long."

With a great vision, King Ly Thai To (974-1028) decided to move the capital from Hoa Lu (Ninh Binh Northern Province) to Dai La (Hanoi now) and named it Thang Long (rising dragon) as he saw a golden dragon appearing above his royal boat when he moved here, according to the legend. This is not only a name but also a great aspiration which is to develop and rise in new opportunities as well as to affirm the national status.

Considering the thinking of modern times, the story of the Golden Dragon which is regarded to bring a good luck, appearing on this great occasion seems to be just a way of marketing. However, the purpose is very real and cultural as it can strengthen the power of the community and the nation. It is an expression of the consensus of the invisible power of the nature, the world, and the people. The ancient people knew how to use all abilities to encourage the community in order to together solve the matter of the country. It is also the strategy for great success all of the time.

It is said that the decision of the capital movement was a turning point of a liberal spirit, from the narrow lane to the large sea, accepting challenging storms to grow up. The origin and destination of this wise decision are both for culture.

It is not coincident that among a plenty of work of the country building at the beginning, the Ly Dynasty built Van Mieu - Quoc Tu Giam (the Temple of Literature), also the country´s first university, in Thang Long, to train the nation's talented people. Opening a school to educate and train talented people was the root of any dynasty. But the foundation and process would decide its success or failure, which depends on the talent of the leader.

¨No intellect, no prosperity¨ is a short but complete, comprehensive and profound summary of the role of culture (not only referred to education) in the construction of a nation. Intellect is the pillar of culture, paving the way for a career whether looking at an individual or a community. Intellectuals are not only about their intellect but also their essence and culmination of thinking development, who are capable of influencing directly to the development of a country. The prosperity of a nation is associated with the stature and position of the country.

Looking back at the history, the dynasties were aware to use talented people to develop the country. From the early days of building the country, the Ly Dynasty (1009-1225) and the successive dynasties, paid much attention to learn and receive the quintessence of human culture, namely Buddhism or Confucianism. They also localized them to become one of the nation's internal strengths, effectively contributing to the building an independent foundation of the country, opening up a period of the strong development.

Someone said that the most challenging moment of human is when we have to face the death. The choice of each individual at that time show their bravery and personality. That's why many people consider the death as light as a feather and the death is not the end if their death is still useful for the living.

The largest challenge of the destiny of a country is the moment of protecting the independence and liberty or losing them into the slavery. Our leaders have always chosen the path for independence and freedom for the country as the only solution. It is also the choice of the humanistic spirit and cultural progress: the cultural choice. It has become the solid basement to unite and create the strength to keep our land in peace for thousands of years.

A new Spring is coming. Spring bring us beautiful dream of flying higher and higher. Opportunities are coming to everyone. Every door into the future is open to all. The country is turning into a new page and the humanity is expanding the door of cooperation, integration and development. It is the time.

In the new opportunities and challenges, it is necessary for courage intellectuals, the . quintessence of the nation's national defense culture. Hopefully, all of the quintessence converge here in this land of Thang Long - Hanoi in the time of entering the age of 1010, which will be the launch for the country to grow with the world in the new era. 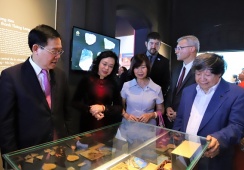 The shining aura of thousand-year-old Hanoi