US to promote renewable development in Vietnam

Vietnam is committed to stepping up efforts against climate change and transition towards a green economy, Prime Minister Pham Minh Chinh has said.

Vietnam has a huge advantage in developing renewables, and the US stands ready to help Vietnam to become one of the top countries in the region in this field with specific projects.

According to Kerry, the US gives priority to its comprehensive partnership with the Southeast Asian country to ensure a strong, independent, and prosperous Vietnam.

During the talk, Prime Minister Chinh expressed his thanks to the US for the donation of vaccines and medical equipment to aid Vietnam's fight against the Covid-19 pandemic.

Chinh highlighted the determination of President Joe Biden and his administration is pushing for global efforts in combating the climate crisis. “A global issue would need a global approach,” Chinh said.

“As one of the countries with a long coastline, Vietnam understands better than anyone the risks and challenges posed by the climate change, especially given the severe impacts on the Mekong Delta region, central and northern provinces/cities,” Chinh added.

Chinh said despite the rough path ahead, Vietnam is committed to stepping up efforts against climate change and transition towards a green economy, focusing on becoming a green economy and with a clear pathway for reducing its reliance on coal power.

“Vietnam aims to raise the proportion of renewable energy in its power mix for sustainable development,” Chinh noted, adding the country is planning for a series of solutions to reduce the emission of methane and greenhouse gas.

Chinh called for the US to continue supporting Vietnam in addressing war consequences, especially in cleaning areas of dioxin contamination in the country.

Both sides agreed the bilateral relations after 25 years of the diplomatic establishment have continued to progress positively, including in trade and economic cooperation.

In this context, cooperation for sustainable development is one of the pillars between Vietnam-US relations, of which renewable projects are the new spotlight.

Ahead of the UN Climate Change Conference of the Parties (COP26) in November in Glasgow, Chinh and Kerry agreed the international community should strengthen cooperation, including financial support for developing countries, to keep global warming below 1.5 degrees Celsius compared to pre-industrial levels. 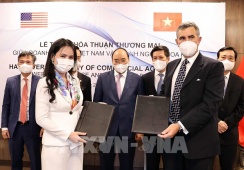 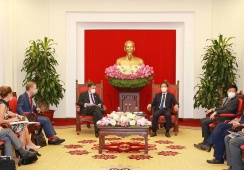