With supporting policies from the government and the adoption of a more resilient operation strategy, the airline expects to start generating profit since 2023 and fully recover its accumulated losses by 2025.

In a Covid-19 ravaged year of 2020, the national flag carrier Vietnam Airlines posted a pre-tax profit of nearly VND11.1 trillion (US$482 million), significantly lower than the airline’s previous estimated loss of VND14.4 trillion (US$626.3 million) in last December.

A lower-than-expected loss came after the airline had completed procedures for depreciation adjustment and funds allocation for aircraft maintenance under the government’s support program, noted Vietnam Airlines in its recent 2020 consolidated financial statement.

As the aviation industry was among the hardest-hit sectors by the pandemic, Vietnam Airlines operated around 96,500 flights in 2020, down 48% year-on-year. This resulted in declines of 51% year-on-year in the number of passengers to 14.23 million and a fall of 47% in the amount of cargo for transportation at 195,000 tons.

For the next five years, Vietnam Airlines targets to resume its operation, while continuing to push for restructuring process by streamlining its organization structure and enhancing efficiency in performance, especially in the sale and leaseback (SLB) of aircraft.

Meanwhile, Vietnam Airlines is expected to divest part of its investment capital at businesses with high efficiency in the aviation industry to support the airline’s financial conditions.

With supporting policies from the government and the adoption of a more resilient operation strategy, the airline expects to start generating profit since 2023 and fully resolve its accumulated losses by 2025.

Under its resolution, the NA agreed to allow the State Bank of Vietnam (SBV), the country’s central bank, to provide refinancing loans worth VND12 trillion (US$518.57 million) for Vietnam Airlines to maintain its operation. 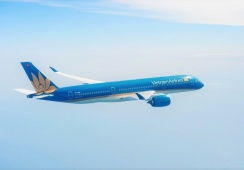 Vietnamese airlines all are in need of timely support, says expert