The fishery authorities must act to substantially reduce the number of fishing boats engaging in illegal, unreported, and unregulated fishing (IUU) in 2021, and no local fishing boats operating in foreign seas by next October.

The Vietnamese Government has taken the issue of IUU seriously, for which it is determined to act so that the EC would lift its yellow card on the country’s fishing sector.

According to Chinh, Vietnam has achieved certain results in its efforts against IUU, but the ultimate goal of having the yellow card lifted remains unfinished as there are still Vietnamese fishing boats operating in foreign seas.

Chinh also mentioned the fact that a number of provinces/cities have strictly punished offenders of the fishing law. “The issue does not only come from the lack of understanding from locals but also irresponsibility and inertia of the local authorities,” Chinh continued.

“Vietnam has to avoid a red card at all cost,” Chinh stressed, urging the entire political system to join the efforts, including the grassroots-level authorities that are in direct contact with the people.

“It is imperative to raise the public awareness on the significance of addressing IUU and make the fishermen understand such action would pose negative impacts on the country’s reputation,” Chinh continued.

As such, the prime minister said the removal of the yellow card is the first step to ensure the local fishing sector is heading in the right direction.

Chinh requested the Ministry of Defense to cooperate with local provinces/cities in closely supervising activities of fishing boats from departing ports to returning, while strictly punishing any violation from local fishermen.

The Ministry of Foreign Affairs is tasked with educating fishermen on the fishing jurisdiction and working with other countries in collecting information on fishing boats violating the laws.

The Ministry of Agricultural and Rural Development (MARD) is expected to soon finalize a proposal on preventing IUU and working with localities in this regard.

The prime minister called for all provinces/cities to soon complete the installation of a vessel monitoring system (VMS) in every fishing boat, especially in Quang Tri, Tra Vinh, Quang Ninh, or Ha Tinh.

Other provinces, including Thai Binh, Haiphong, Quang Ninh, Ninh Thuan, or Quang Ngai, should ensure close supervision of fishing boats’ activities and efficiency in the verification of fishery origins.

“A list of suspected fishing boats should be set up for timely preventing any offense” he added.

Chinh stressed the fishery authorities to reduce the number of fishing boats engaging in IUU by 40% in 2021, and by next October, there should be no local fishing boats operating in foreign seas.

During the meeting, MARD’s representative said Vietnam’s legal framework on fishery has been finalizing to better reflect the country’s ongoing efforts in global integration and the goal of promoting a sustainable fishery sector.

The Law on Fisheries, first promulgated in 2017, has covered all issues related to IUU combat. “The MARD would continue to revise current regulations to ensure the practicality of the law and in compliance with recommendations from the EC,” he added.

On the issue, Vice Minister of Industry and Trade Tran Quoc Khanh said IUU activities not only damage the environment but also the livelihoods of millions of law-abiding fishermen and companies.

“With sufficient legal system in place, the role of local authorities is especially important to resolve the issue,” Khanh said. 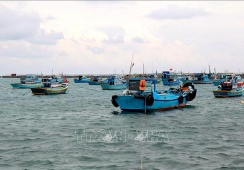 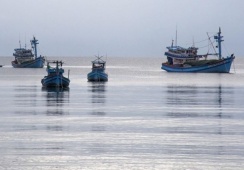