The rail freight link between Vietnam and Belgium is a major milestone for the railway industry.

Vietnam Railways Director Dang Sy Manh expressed to The Hanoi Times his optimism on the future of the company following the launch of its first rail freight link to Europe.

How do you see the launch of the first rail freight to Europe by the Transportation & Trade Joint Stock Company (RATRACO), a member of VNR?

For years, international cargo transport has been a major part of railway transport, as the volume of goods transported among Vietnam, China, and country members of the Organization for Cooperation of Railways (OSJD) in 2020 rose by 7% against the previous year to 882,300 tons.

Last year, the volume of goods from Vietnam to Europe via China and Kazakhstan rose by 14% year-on-year to 1,732 TEU.

In July, RATRACO launched the freight train route to Europe, which is seen as a major achievement for the railway industry, especially as we are facing more challenges from domestic transportation.

Could you share more details about the preparation process for this Europe-bound rail freight link?

Due to the Covid-19 pandemic, there has been a shortage of empty containers since last October from China.

In this circumstance, we have to find new partners and eventually reached an agreement with Maersk Lines to work on a transport route to Europe.

As a global container shipping company, the Danish firm transports over 12 million containers with a network of 300 seaports worldwide would supply us with empty containers and other services for transporting goods to Europe.

At the same time, we had had a meeting with the OSJD to complete the required legal procedures.

To be able to launch the rail freight link to Europe on July 20, the VNR had to reach an agreement with related parties, including those from China, Kazakhstan, Mongolia, and Russia, along with a commitment on the amount of cargo transported through this route.

What is preventing the VNR from launching its own international freight trains across eight countries?

Given the budget constraint and the lack of empty containers, it is impossible for VNR to work alone in launching its own international freight trains.

In the new route, trains will depart from Yen Vien Station in Hanoi to Liege (Belgium), where all containers are unloaded and sent by trucks to Rotterdam (the Netherlands). In between, the trains would go through Zhengzhou (China) using a standard-gauge rail track of 1,435mm, but when crossing to Kazakhstan, all the containers will be transferred to rolling stock running on a rail track of 1,520mm.

For this route, all 23 original coaches from Vietnam would be pulled by China’s Asia-Europe train and later travel through Kazakhstan, Russia, Belarus, Poland, Germany, and Belgium as the final destination.

What are the impacts of this freight link amid the pandemic?

We want to show our efforts of overcoming difficulties to survive. As passenger transportation was severely impacted by the pandemic, the VNR has immediately shifted to international cargo transportation as the competition in the domestic market is fierce.

The rail freight link between Vietnam and Belgium is a major milestone for the railway industry as it helps form new transportation routes from Vietnam to Europe. Meanwhile, I expect the cooperation between RATRACO and Maersk Lines to open a new direction for development by the establishment of a logistics chain between railway and seaports.

Are you worried that shipping companies, including Maersk Lines, to take a bigger share in the international transportation of railway firms?

While international transport fares of railways are normally 30-40% higher, we have the advantage of the speed. For example, shipping companies would take 36-37 days in good weather to travel between Vietnam to Belgium, but it takes railway companies only 25 days.

More importantly, we are not much affected by the weather. So I think the demand for international railway transport would grow in the post-Covid-19 pandemic period. Despite the disease, cargo transported among OSJD countries rose by 10% in 2020 against the previous years to 77.72 million tons. 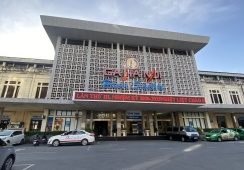 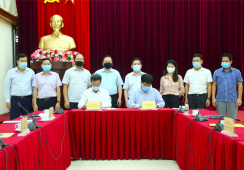 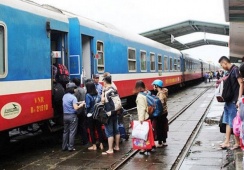