Vietnam is shifting from attracting FDI to cooperating with foreign investors on a fair basis for mutual benefits.

The Vietnam-US comprehensive partnership could only continue its substantial progress with the successful cooperation of businesses from the two countries, in which those from the US take a leading role.

“US businesses should further expand investment activities in Vietnam and contribute to the country’s socio-economic development in the coming time.”

State President Nguyen Xuan Phuc stressed his view during the US-APEC Business Coalition Meeting, which is a part of the APEC Economic Leaders’ Week in Bangkok, Thailand.

According to Phuc, Vietnam is currently mobilizing resources to overcome the Covid-19 pandemic and push for economic development amid growing global uncertainties.

With stable economic fundamentals and inflation under control, the country’s GDP expanded by 8.83% year on year in the first nine months of 2022.

International organizations such as the World Bank and the IMF have made optimistic forecasts for Vietnam's economic growth this year of around 7.5-8.2%.

The UN Conference on Trade and Development (UNCTAD) named Vietnam among the world’s top 20 host economies for foreign direct investment.

“Vietnam is shifting its stance from attracting FDI to cooperating with foreign investors on a fair basis for mutual benefits, with priority given to projects using high technologies and with spillover effects and contributing to the country’s sustainable development,” Phuc said.

Over the years, Vietnam has been a favorite investment destination for major US technology companies such as Apple, Dell, and Intel, so Phuc called on US companies to continue strengthening ties and creating conditions for their Vietnamese counterparts to integrate into global supply chains, to make Vietnam one of the global and regional production hubs.

Phuc said Vietnam aims to become a developing country with a modern industrial sector, reaching upper-middle income by 2030. By 2045, Vietnam will become a developed and high-income country.

"The government's strategy will be to boost green growth, the digital economy, scientific-technological development, innovation, and further integration into the global economy," Phuc said.

“Vietnam would continue to open the economy and adopt a selective FDI attraction approach to support local businesses to strengthen linkage with their foreign partners,” he continued.

Vice President of the US-ASEAN Business Council Michael Michalak recalled his working experience in Vietnam, saying US companies have always received support from State President Nguyen Xuan Phuc regardless of his positions and also from the local authorities.

He said the company would continue to accompany Vietnam during its digital transformation process.

Meanwhile, Google representative Quynh Do thanked the active support from the Vietnamese Government for the tech firm’s operation in Vietnam over the years, saying Google plans to play a more active role in developing e-commerce and digitalization in the country.

During the meeting, US companies reaffirmed their commitment to expand investment activities in Vietnam and introduce new technology products in the fields of healthcare, financial technologies, banking, smart agriculture, renewable energy, infrastructure, and IT, among others, to the local market.

In this regard, Phuc suggested US companies continue investing in new fields in Vietnam, such as digital economy, finance banking, smart agriculture, and renewables.

He stressed the advantages of Vietnam as a safe and attractive investment destination with political stability, a favorable business environment, and a large domestic market with 100 million people.

“Vietnam is determined to create a transparent and effective business environment based on its commitments under new-generation FTAs, such as the CPTPP, EVFTA, and toward OECD’s standards,” Phuc said.

In this context, Phuc pledged to soon address bottlenecks in the legal framework, infrastructure, and human resources; promote the development of supply chains and reduce transaction costs, especially in logistics and administrative compliance fees; build a stable and predictable legal environment with a high level of transparency and accountability. 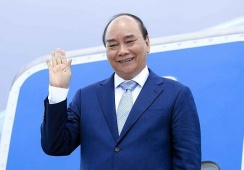