Vietnamese private enterprises’ participation in e-government should be encouraged

Vietnamese enterprises are willing to invest more financial resources and technology in e-government if the country has a better mechanism for public private partnership in the aspect, according to local insiders.

In the past years, a number of Vietnamese corporations have participated in digital transformation in the forms of providing consulting, building an e-government architecture framework, developing integrated platforms, data interoperability, or providing smart urban solutions. The drive has drawn the advantages of Vietnamese enterprises such as military-run telco Viettel with the strength in cloud computing platform, Vietnam Posts and Telecommunications Group (VNPT) in data integration, and privately-run FPT which stands out with its Blockchain-based identity authentication solutions.

However, there is currently no incentive mechanism to encourage large enterprises to invest in the public-private partnership format, said Pham Anh Duc, deputy general director of Viettel International Business Solution Corporation. For example, the country has a notable tourism industry but the regulator does not have the budget to invest in large-scale projects, while businesses that are able to do it fall short of a mechanism to participate in such a drive, he said.

Therefore, for large-scale and important projects, there should be a mechanism to a create conditions for businesses to invest in researching and developing products first. In addition, it is necessary to regulate the data mining and commercialization. With information systems, there should be a mechanism allowing enterprises to access and use data formed in accordance with the law.

Notably, some developed countries have allowed businesses to engage deeply in the process of e-government building. In Singapore, the government has harnessed resources from enterprises by dividing them into two groups: The first group comprises of businesses that can utilize technology and the second consists of those who are able to develop together.

Mr. Duong Anh Duc, vice chairman of the Ho Chi Minh City People’s Committee, said the city aims to build an efficient digital government by 2030 and develop a digital economy. He also shared the necessity to utilize all resources because the government alone is unable to achieve it. Therefore, public-private partnership must be devised to accelerate the process effectively.

Besides, some insiders also believed that, to boost the development of e-government, it must be associated with administrative procedure reform. 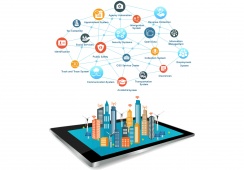 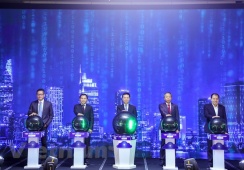