The cost of tutoring high school students is the largest amount for family spending at 43%.

Vietnam's investment in education has steadily increased over the past 10 years, accounting for 18% of total state expenditure.

Investment in education over the past 10 years was still lower than the targeted 20%. It was equivalent to 4.9% of the country's GDP, higher than many nations in the region, according to the report.

The Ministry of Education and Training is facing many challenges in supervising education expenditure at the local level as it manages only  50 out of 42,000 educational institutions nationwide (from preschool to university).

Vinh also added that the average budget spending per preschool and high school student is relatively equal. However, the average budget expenditure per student at the university level remains low compared to other countries. The percentage of pupils and students who are exempt from tuition fees in secondary and secondary schools, and professional and university institutions remains low.

On average, the households contribute about 24% of the total cost of schooling (kindergarten, primary, and high school). The expense tends to increase in each grade, of which the tutoring of secondary school students takes up the largest amount of household expenditure with 43%, which is followed by tutoring spending for secondary school students with 42% and  32% for primary pupils.

The report revealed that Official Development Assistance (ODA) for Vietnam has gradually decreased since the country became a low-middle-income country in 2015. However, ODA for education and training has remained relatively stable, at about US$130 million per year (according to the Organization for Economic Cooperation and Development (OECD) data), mainly for scholarships at the university level and vocational education.

According to the Vietnam National Institute of Educational Sciences, over the past 10 years, Vietnamese education from preschool to university has achieved good results.

The country has completed the universalization of 5-year-old preschool education since 2017. The percentage of children attending school is increasing.

However, in the last 10 years, Vietnam’s higher education was still far below other countries in the region. 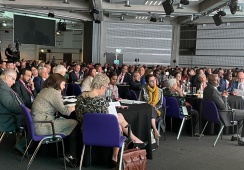