The Hanoitimes - The growth deceleration was broad-based across the primary, secondary, and tertiary sectors.

Fitch Solutions, a subsidiary of Fitch Group, has revised its forecasts for Vietnam’s 2020 real GDP growth to 2.8%, from 6.3% previously, as the economy is expected to come under strong headwinds from both domestic and external shocks brought about by the evolving Covid-19 pandemic globally.

The growth deceleration was broad-based across the primary, secondary, and tertiary sectors, with tourism related sub-sectors such as hospitality and transport services, amongst others, contracting on a year-on-year basis.

Fitch's prediction is much lower than the World Bank's forecast growth of 4.9% for Vietnam this year, while the GSO still maintained the view that the 6.8% growth target is still attainable.

Fitch expected growth of the agriculture sector to come under some pressure from a year-on-year contraction in hog production following a culling of about 20% the nation’s hog herd towards the end of 2019 to stem the spread of the African swine fever. While poultry production still appears likely to be in expansion, a key risk continues to stem from isolated provincial outbreaks of Avian flu at the moment, which would require a culling of the flock to stem a further outbreak.

Growth of the secondary (industrial and construction) sector, which account for about 35% of GDP, is set to extend its weakness over the coming quarters. The secondary sector grew by 5.2% year-on-year, slowing from 7.8% year-on-year in the fourth quarter of 2019.

Weak demand as well as a low oil price environment should perpetuate a continued trend of year-on-year contraction in the extractive sector, which contracted by 3.2% year-on-year in the first quarter this year, versus a 0.5% year-on-year growth in the previous quarter, with the activity contraction to be led by crude oil and natural gas production.

Growth of the sector’s largest component, manufacturing (about 17% of GDP), also slowed to 7.1% year-on-year in the January – March period, from 10.2% year-on-year in the fourth quarter last year, due to severe supply chain disruptions as a result of China’s lockdown of some cities to curb the spread of the Covid-19.

While China has begun to restart its factories, thereby easing the prior supply chain disruption, it is expected the weakness in this subsector to persist over the coming quarters due to weak external and domestic demand as the world enters a recession.

With travel restrictions in place across the globe which has since cause global travel to come to a standstill, Fitch predicted the collapse of Vietnam’s tourism sector, which account for 9.2% of GDP, to weigh heavily on related sectors such as hospitality, transport, and retail.

Covid-19 driven changes to consumer behavior, such as an aversion to eating out and venturing outdoors in general, would also impact the above three services sub-sectors adversely from a domestic demand perspective. This is likely to be worsened by the ongoing slowdown across the economy, which would result in income, and even job losses for some, and this would also weigh on consumer spending and correspondingly domestic demand.

Other services segments which Fitch believed would also face strong pressure from weaker economic activity are real estate services and financial services. While healthcare services is likely to experience robust growth amid the pandemic, at 3.0% of GDP, this will do little to offset the overall growth deceleration. Moreover, a lockdown of major cities, should it be implemented, will further worsen the outlook for the broad economy and especially services. 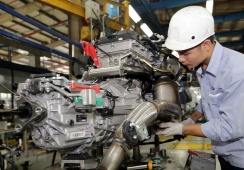