The two ring roads would connect Hanoi with near 10 other provinces.

Hanoi city’s authorities have proposed to the central government special mechanisms for speeding up two billion-dollar ring roads No.4 and 5 that would connect 10 provinces to boost economic growth, local media reported.

The special mechanism would be in forms of simplified procedures so that the Ministry of Transport (MoT) and provinces and cities involved in the projects could fast-track them.

Hanoi also suggested that the MoT should be in charge of the construction of the entire ring road No.5 connecting eight provinces and cities in the North to ensure better connectivity, while Hanoi would be responsible for ring road No.4 whose construction would start the immediate future.

For ring road No.5, as of May 2020, only a small section of it has been completed with investment capital of US$170 million. 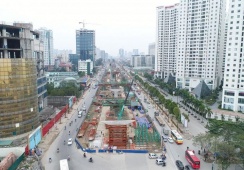 Hanoi's modern ring road to be completed in 2020