Transportation companies could face their end at any moment, said a sector’s insider.

As the Covid-19 pandemic continues to wreak havoc on the Vietnamese economy, transportation firms are forced to scale down operations to keep their business afloat. However, the fact that petrol prices have risen for two consecutive times in June has further placed more burden on local companies.

“Petrol prices account for 30-35% of operational cost for a transportation firm. To break even, the number of passengers should reach at least 60% of a vehicle’s capacity. For example, 24 passengers are the minimum expectation for a 40-seat passenger bus. But in this current situation, we are still operating with only 10-15 passengers per car, or even less,” Tran Hong Phong, director of Minh Hang company, told The Hanoi Times.

A representative of a company providing contract-based car-sharing services added while the impact of hiking petrol prices is less significant compared to the lack of passengers, “it has no doubt aggravated difficulties for transportation business as a whole.”

“Enterprises could face their end at any time in this case,” the representative, who requested anonymity, told The Hanoi Times.

In an open letter sent to the Directorate for Roads of Vietnam (DRVN), Vietnam Automobile Transportation Association (VATA) provided a grim assessment over the current state of its members in the first six months of the year.

“While the overall capacity only reaches 20-30% compared to its pre-Covid-19 level, operational costs have been on the rise as a result of hiking petrol prices,” stated the VATA.

Economist Ta Viet Anh suggested that as petrol is a key input material for most economic sectors, a hike in prices of such products would lead to higher prices of final products.

“The transportation sector is especially vulnerable to changes in petrol prices,” Anh told The Hanoi Times.

Despite rising prices, the two ministries noted they have used a big chunk from the petrol price stabilization fund to keep the price increases at an acceptable level.

VATA Chairman Nguyen Van Quyen explained that the rising of domestic petrol prices was in line with prices in the global market, but noted more efforts from the MoIT and MoF are required to keep hold of these prices in the local market.

Economist Ta Viet Anh proposed the Government agencies review petrol prices from 15-day intervals to once per week, saying this would help the government to be more flexible and active in determining petrol prices.

Meanwhile, lecturer Nguyen Ngoc Tu from the Hanoi University of Business and Technology pointed out the high proportion of tax at 50-55% in petrol prices.

“Taxes and fees account for around half of the price of a litre of petrol,” he told The Hanoi Times, saying the Government could consider revising the tax rates for such products.

Apart from a price review in late May that kept the petrol prices unchanged, every meeting since the Tet (the Lunar New Year holiday in February) has resulted in prices going up.

A study from the World Bank revealed logistics costs in Vietnam make up 20% of the country’s GDP, nearly triple that of developed economies. It is estimated that there are over 800,000 cars and 1.2 million people working in the local transportation sector.

The VATA informed that in comparison to the pre-Covid-19 the number of passengers using transportation services declined by 70% with 50% of cars staying idle due to the lack of passengers. 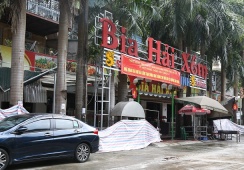