Tourist sites nationwide closed to visitors due to Covid

The Hanoitimes - Tourist sites in many cities and provinces have announced their closures to restrict the spread of the pandemic.

Tourist sites closed and festivals suspended. Such are the measures taken so far in Vietnam to ensure the safety of travelers and the community.

The city authorities also shut down cinemas, bars, online game shops, karaoke, theaters until the end of this month.

Historical and cultural sites in the province remain closed from March 14. Earlier, they also stopped welcoming international tourists arriving at Chan May port as well as ordered bars, karaoke, and internet shops to close.

All resorts and accommodation establishments in the province are ordered to stop welcoming international tourists.

Vietnam has reported 68 people positive with the novel coronavirus at the time of writing. To curb its spread, Vietnam has tightened the entry of visitors from many parts of the world. 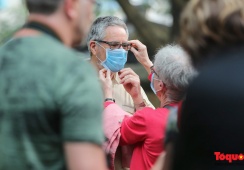