The Hanoitimes - The fact that Asanzo only assembled products with components made by other companies but then labeled them as “Made-in Vietnam” is not an offense.

The lack of specific criteria for “Made-in-Vietnam” products as well as for products assembled and then sold domestically means electronic firm Asanzo has not committed trade fraud, according to the conclusion the Anti-corruption, Economic crimes and Smuggling Department, aka C03, under the Ministry of Public Security.

As a result, the fact that Asanzo only assembled products with components made by other companies but then labeled them as “Made-in Vietnam”, “Manufactured in Vietnam”, or “Origin from Vietnam”, is not an offense, said C03.

C03 requested the General Department of Vietnam Customs to check components and parts imported by Asanzo after they had been cleared by the customs authorities to ensure the firm’s compliance with laws on anti-smuggling and tax payment.

Regarding Asanzo’s use of slogan “Advanced Japanese Technology” and “Vietnamese High-quality Product” for some products, which is said to be the act of cheating customers, to date, the police have not received any complaints or accusation that Asanzo has actually committed such an act through selling its products, stated C03.

Moreover, distributors and sellers of Asanzo products all confirmed they did not sell the latter’s products purely on this slogan, but based on a combination of price and quality of these products.

Previously, Japan’s technology corporation Sharp said its Sharp Roxy Hong Kong did not either sign a contract dated January 24, 2017 with Asanzo for technology transfer or send a confirmation letter of cooperation with the Vietnamese firm as claimed by Asanzo in its press conference in September 2019.

C03 also added that there is no sufficient evidence to conclude that Asanzo has been the beneficiary of selling Chinese products forging Vietnamese origin in Vietnam.

Last June, Tuoi Tre newspaper reported Asanzo had been found selling its self-claimed "Made-in-Vietnam" products but actually imported from China. Tuoi Tre quoted sources as saying Asanzo’s production facilities actually only assembled televisions with components originated from China, while other electronic household appliances were imported entirely from China without a single component made in Vietnam.

CEO of Asanzo Pham Van Tam held a press conference later on June 23, 2019 admitting the use of up to 80% of foreign-made components for the company’s main products including televisions and air-conditioners. However, Tam said the software for televisions was fully developed in Vietnam. 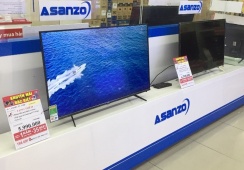