Such high growth shows the Government's determination in its efforts for socio-economic recovery and development amid global uncertainty.

Vietnam's National Assembly (NA) today [November 10] adopted a resolution on socio-economic development for 2023 with the GDP growth target for the year at 6.5%.

Other major economic objectives for next year include inflation of 4.5%, GDP per capita of $4,400, and labor productivity growth of 5-6%.

During a discussion session, Chairman of the NA Economic Committee Vu Hong Thanh called on the Government to set growth targets under different scenarios amid the ongoing conflict between Russia and Ukraine and increasing geopolitical tension around the world.

Regarding the socio-economic resolution for 2023, Thanh said the GDP growth target for 2023 is based on the assumption that Vietnam's economic expansion rate this year is around 8%.

In addition, Vietnam’s economy continues to face major challenges on both domestic and international fronts, including high inflationary pressure, the economic recession in major partners, and rising prices of strategic commodities.

“A GDP growth target of 6.5% for 2023 shows the determination of the Government in efforts for socio-economic recovery and development,” Thanh added.

In response to the view of several NA deputies that the 4.5% consumer price index (CPI) target for 2023 would be difficult to achieve given the volatile global economic situation, Thanh noted that a low CPI  reflects the government's expectation to stabilize macro fundamentals and contain inflation.

In the meantime, the NA resolution calls on the Government to improve the resilience of the financial-banking sector to any circumstances and to ensure flexible management of exchange and interest rates.

The expansionary fiscal policy should be conducted cautiously while tightening the capital inflow into risky fields such as real estate, corporate bonds, or securities, added the resolution.

In long term, the resolution stressed the necessity for the Government to finalize the legal framework for the management of digital assets and cryptocurrencies.

“The Government is expected to accelerate the construction of key transport infrastructure projects, especially urban railway, expressway, and ring roads,” it added.

Another key task for the Government in 2023 is to address bottlenecks in developing large-scale electricity projects including the Thai Binh 2 thermal power plant, Nghi Son 2, Duyen Hai 2, and Van Phong 1. 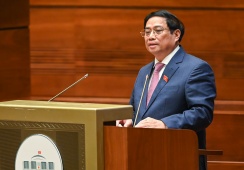 Vietnam’s GDP growth this year to expand by 8%: PM 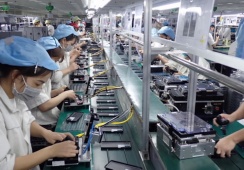