The renovation is hoped to attract tourists after the capital city relaxed social distancing rules.

Promoting the values of the Temple of Literature’s cultural space is a concern of the city managers, researchers, and those who are dedicated to the cultural heritage of the country.

The Center for Scientific and Cultural Activities of the Temple of Literature has made renovations to attract visitors, especially young people, from the new logo to the space inside the relic, during the social distancing period in the capital city.

Director of the center Le Xuan Kieu told The Hanoi Times that although there is no visitors during the Covid-19 pandemic, the Temple of Literature is still open online.

“Our workers focus on preparing more attractive activities and products to offer on the digital platform and get ready to welcome visitors when it reopens,” he stated.

Currently, the Temple of Literature has deployed a non-profit project called “Temple of Literature Cultural Space”, which is aimed at introducing Vietnamese feudal times (939-1945) to visitors, scholars, and students in Vietnam and abroad through online and offline events.

The project “Temple of Literature Cultural Space” not only covers a period spreading throughout the thousand-year with rich historical and cultural values, but also underlines the persistence of the Vietnamese traditional educational method.

Under the collaboration with young people of the Gavisto Diplomat group, Temple of Literature will organize various cultural activities and exchanges to provide information on Vietnamese history to the public.

Appreciating the launch of the project based on a digital platform, Assistant Director of the Paris Region International Cooperation Support Agency in Vietnam (PRX-Vietnam) Truong Quoc Toan told The Hanoi Times that in the context of the Covid-19 pandemic, with the application of technology, he saw that the leaders of the Temple of Literature have an open mind to remove the barrier between them and the public.

“We have brought the values of the heritage to the viewers, instead of passively waiting to them to approach us. I think this is the mindset needed for monuments,” he said.

Accordingly, the project will target people from different backgrounds to bring them new experiences and get them visit the relic one and again. Moreover, the Temple of Literature is not only the place for students to come before exams to pray for good luck but also for everyone to be immersed in the cultural space, cultural activities, exhibitions and art performances.

However, the application of technology in the heritage accounts for only 30% of the project, and the remaining 70% is devoted to content and presentation.

Hoang Doan Trang, manager of Cultural Space of the Temple of Literature project, also said that in order to turn the relic into a cultural and community place, it is necessary to tell the stories in words and numbers to make them understandable to young people in an interesting way.

Built in the 11th century during the Ly Dynasty (1010 - 1225), the Temple of Literature, which honors studiousness, is one of the most popular relics and tourist destinations in Hanoi and the country.

The complex consists of Van Mieu, a temple dedicated to Confucius as Confucianism used to be a predominant philosophy in Vietnam in feudal times, and Quoc Tu Giam, the first national university in the country.

During its over 700 years of operation, the Temple of Literature had trained thousands of talents for the country. Thus, this is not only an attractive relic for domestic and foreign tourists but also a place of praise for excellent students.

The historical relic is also on the list of 23rd National Special Monuments by the Prime Minister of Vietnam. 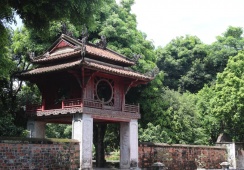