Vietnam and the US have made milestones in building a forward-looking partnership.

US Defense Secretary Lloyd J. Austin expressed Washington's wish to upgrade ties with Vietnam to a strategic partnership in a meeting with Vietnamese President Nguyen Xuan Phuc on July 29.

He said the two countries could expand cooperation in areas that are of each side’s strengths.

Being head of the National Defense and Security Council, Phuc said he was committed to facilitating the cooperation of the two defense ministries. Vietnam expected further the US-ASEAN ties for peace and prosperity in the region and the world, he added.

Austin agreed with Phuc on the issue, saying that the US will continue speeding up the relations with ASEAN, participating in the ASEAN Defense Ministers’ Meeting Plus (ADMM+), and committing itself to fortify the ties with regional countries.

In a tweet after the meeting, Austin said “It was my honor to meet President Nguyen Xuan Phuc today. We discussed our strong bilateral partnership, and I emphasized that the United States supports a strong, independent, and prosperous Vietnam.”

On the same day, Austin met Vietnam’s Prime Minister Pham Minh Chinh when they discussed a range of issues, including the US commitment to help Vietnam battle Covid-19.

Chinh expected to promote the two sides' bilateral relations on the basis of mutual respect for each other’s independence, sovereignty, territorial integrity, and political institutions, as well as mutual benefits for peace and stability in the region and around the world.

During the talks, Chinh welcomes US investment in trade and investment, climate change, science-technology, education, mostly in areas that Vietnam is looking for investment like infrastructure, transport, manpower, and renewable energy.

Carl Thayer, professor emeritus of politics at the University of New South Wales and a Southeast Asia expert, said before the meeting that Austin was likely to sound out Vietnam’s leaders on the prospect of upgrading the partnership and “learn their views on what should be priorities in their defense cooperation relationship and in dealing with Chinese assertiveness in the South China Sea”.

Thayer said Austin would stress Washington’s commitment to stability and security in the disputed waterway and support for regional countries to stand up to Beijing. “These discussions likely will be more of an exchange of views on strategic issues, how to manage relations with China, and Vietnamese priorities for future defense cooperation,” the professor noted.

Since 2020, Prof. Thayer gave his reflections on the possible ties upgrading. “I expect the United States and Vietnam to resume discussions and eventually reach an agreement on a strategic partnership in 2021," he said in a consultancy brief.

Elaborating on the Vietnam-US relations, Thayer said they have undergone a “remarkable journey” as both countries celebrated the 25th anniversary of diplomatic ties [which was established on July 11, 1995].

Thayer attributed the impressive path to “a number of milestones”. Typically, both sides eventually managed to cooperate over war legacy issues such as a full accounting for US service personnel missing-in-action (MIAs) and remediating the effects of Agent Orange/dioxin poisoning, reaching a bilateral trade agreement, an agreement on the comprehensive partnership, the end of the US arms embargo, and the exchange of visits by senior leaders.

On 13 July, Marc Knapper, President Biden’s nominee as the next Ambassador to Vietnam, told a Senate confirmation hearing “Right now, we have what we call a comprehensive partnership [with Vietnam]; we hope to raise it to a strategic partnership, and I will take steps to do that by strengthening even further our security relationships with Vietnam.” 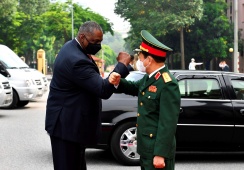 Building trust: Message by US Defense Secretary in Vietnam visit 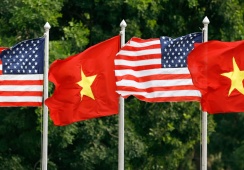 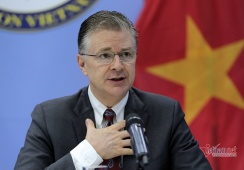