Vietnamese textile and garment enterprises have received orders for the end of April 2021.

The most optimistic forecast for Vietnam’s textile and apparel industry shows that the sector may recover from the second half of 2022 while another recovery scenario for the sector predicted a production normalization by the end of 2023, according to local insiders.

“The garment factories producing knitwear and basic clothes are running at full capacity and this situation would go on until July and August. That is a good signal for the industry,” said Le Tien Truong, General Director of the Vietnam National Textile and Garment Group (Vinatex).

Vinatex targets to gain export revenue of US$2.9 billion, equivalent to that of the pre Covid-19 level (2019). Export revenue of Hung Yen Garment Corporation is expected to grow 5-10% in 2021 compared to 2020. “Our orders come from the US (50% of total revenue), the EU and Japan,” Nguyen Xuan Duong, the company’s Chairman said.

In the first quarter of this year, Vietnamese textile and garment enterprises have received orders throughout the end of April 2021.

According to the General Department of Vietnam Customs, in the first three months, the industry’s export revenue stood at US$3.7 billion, up 18.3% against the same period of last year.

The increase was attributed to a surge of personal protective equipment (PPE) orders that flowed in from around the world. Local manufacturers exported almost 1.2 billion masks through to December 2020 to North America, Europe and around Asia, according to Forbes.com.

Among the manufacturers, Vietnam Goods and Exports (VGE) is an example, which turned to making cloth face masks. "We made the decision to switch in early 2020, and sees an ongoing demand for the product," VGE founder Anh Tran was quoted as saying.

“If vaccines are effective, you will probably see a drop-off in the wearing of masks near the end of 2021," Anh said, "but from now until then, it is still a massive industry that just exploded overnight."

Vietnam has definitely become a shining star in the global PPE trade in 2020 because prior to that most PPE was manufactured in China or the US, Anh added.

The industry is projected to reach export turnover of US$39 billion this year. To fulfill the target, local businesses are expected to expand to more markets, taking advantage of the free trade agreement (FTAs) of which Vietnam is a signatory.

Vinatex’s leader said that in order to take advantage of the tariff reduction from FTAs, they need to prove the their products originate is from Vietnam or other FTA members. This is in line with the rule of “yarn forward” as required by the Comprehensive and Progressive Agreement for Trans-Pacific partnership (CPTPP) and the EU-Vietnam FTA.

In 2020, Vietnam's textile and garment exports dropped by 10.5%, reaching US$35 billion. While the total world demand decreased by more than 22% from US$740 billion to US$600 billion and all textile and garment manufacturing countries saw a decrease of 15-20%, the figure of Vietnam was still much lower than the general level.

“The sector has suffered the decline for the first time after 25 years  penetrating the global market,” Truong said. 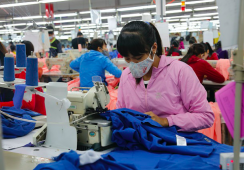 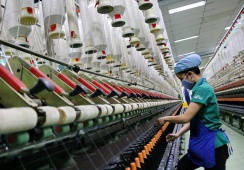