The Morrison government has committed an amount of US$192 billion to modernize its defense capacity for the next decade.

Emeritus Professor Carl Thayer said a number of new policies in Canberra will translate in action especially in the South China Sea when asked about Australia’s policy toward Chinese maritime expansion.

The Australian Prime Minister and Ministers for Foreign Affairs and Defense have made clear through coded references to Australia’s national interest that Australia will not “go all the way with the USA” or join in Secretary of State Pompeo’s anti-Chinese Communist Party crusade.

Australia, however, will join the US in an increased tempo of military exercises in the South China Sea, especially if they involve third parties such as Japan, India, France, and the UK, Prof. Carl Thayer at the University of New South Wales, Canberra said in a brief released earlier this month.

He said Australia and the US will work closely to counter Chinese disinformation and cyber threats and the two countries also will cooperate on public health security in Southeast Asia and the South Pacific. This was an Australian initiative to encourage the US to take a leadership role in combatting Covid-19.

At the same time, Australia will embark on a stepped-up program of engagement with selected countries in the Indo-Pacific including Japan, India, Indonesia, and Vietnam.

As Australian Foreign Minister Marise Payne and Defense Minister Linda Reynold noted in an op-ed piece published in the Australian newspaper on July 25, Australia will look “to widen and deepen our friendships across the Indo-Pacific” in tandem with “our alliance with the US.”

Australia’s policy toward Chinese maritime expansion should be viewed in the spread of the global health crisis over the past few months.

Prof. Carl Thayer said Australia’s bilateral relations with China deteriorated sharply after Prime Minister Scott Morrison called for an independent review of the World Health Organization and its handling of the coronavirus campaign.

Consequently, China has refused to take calls from Australian ministers and has imposed several economic sanctions on Australian exports while threatening to take more action.

Royal Australian Navy warships have joined with the US Navy to conduct exercises in the South China Sea.

Most recently a Task Force Group of five Australian warships joined the Ronald Reagan Carrier Strike Group for exercises in the Philippine Sea. This Task Force Group is now underway to Hawaii to participate in the Rim of the Pacific Exercises (RIMPAC).

On June 23, Australia submitted a note verbale to the Commission on the Limits of the Continental Shelf (CLCS) declaring illegal the basis for China’s claims over the South China Sea.

In the 2020 Defense Strategic Update and Force Structure Plan released by Prime Minister Morrison on July 1, China is although not named, it is clear that the major strategic challenge facing Australia is the modernization of the Chinese military to such an extent that it now poses a direct threat to Australia.

China’s ‘grey-zone’ activities also have expanded across the Indo-Pacific. These involve military and non-military forms of assertiveness such as militarization of the South China Sea to active interference, disinformation campaigns, and economic coercion aimed at achieving strategic goals without provoking conflict.

The Morrison government has committed to spending AUD$270 billion (US$192.4 billion) over the next decade to modernize the Australian Defense Force including its capabilities for long-range strike. It is likely that Australia’s defense expenditure will exceed 2% of GDP per annum.

At the recent Australia-United States Ministerial (AUSM) consultations, Australia and the US signed a confidential Statement of Principles on Alliance Defense Cooperation and Force Posture Priorities in the Indo-Pacific. A working group has been set up to develop detailed plans for bilateral military cooperation as well as cooperation with other states.

Prof. Thayer went on to say that Darwin will become the hub for a range of new initiatives. The US will fund a major fuel reserve. Both sides will cooperate in the maintenance and repair of military equipment and platforms. The rotational deployment of US Marines is slated to take place throughout the year, and other nations will be invited to participate in training and other exercises. 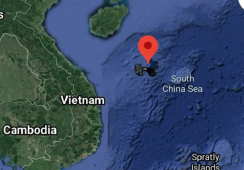