Hun Sen said that there were no countries to turn to except Vietnam for help in reorganizing the fight against Pol Pot's regime and saving millions of people.

Cambodia has thanked Vietnam for its great support in the journey of overthrowing Pol Pot’s genocidal regime, which was in power between 1975 and 1979.

Cambodian Prime Minister Hun Sen made the statement on June 20 at a ceremony marking the 45th anniversary of launching the campaign to topple the Khmer Rouge regime with Vietnamese Prime Minister Pham Minh Chinh in attendance.

The two PMs chaired the celebrations at the historic site “Koh Thma-X16” in Tboung Khmum province bordering Vietnam where the two they highlighted the efforts to fight the Khmer Rouge regime and secure peace.

As part of the ceremony, the two leaders joined a tree-planting ceremony, visited the Cambodia-Vietnam Friendship House, and talked with local residents, where Hun Sen underscored the Vietnamese people’s selfless, sincere, and righteous international spirit and the special solidarity and friendship between the two nations, according to the Khmer Times.

In his remarks, Hun Sen expressed his gratitude to the Communist Party of Vietnam, the State, and the people for supporting him in saving Cambodia from the genocidal regime.

He rejected the claim that the intervention of Vietnamese troops in Cambodia was an "invasion". He said that if he did not seek intervention from Vietnam, there were no other countries he could turn to for help, noting that even the United Nations recognized the Khmer Rouge government.

June 20 is marked as a reminder of the role Hun Sen and his four allies played in requesting assistance from the Vietnamese government in 1977 to help overthrow Pol Pot’s regime.

PM Chinh said celebrating June 20 is a “great and meaningful event” to commemorate the beginning of the historic journey leading to the overthrow of the genocidal regime, bringing about the rebirth of the Cambodian people, and demonstrating the special cooperation and solidarity of the peoples of both countries.

Chinh said the event is becoming more meaningful in the context that both countries are organizing a series of grand activities to celebrate the 55th anniversary of Vietnam-Cambodia diplomatic relations (June 24, 1967- June 24, 2022).

This is the second time Hun Sen held the celebrations near the Vietnam border in Koh Thma village after the first in 2017.

According to a pamphlet published by Cambodia’s Ministry of Defence in 2017, on the night of June 20, 1977, Hun Sen and four other comrades dropped their guns, walked through the forest, and crossed the border into Vietnam with the desire to defeat the Pol Pot regime and save millions of people who were in danger of joining others who fell victim to genocide.

With the support of Vietnamese troops, Phnom Penh was liberated on January 7, 1979, and the Khmer Rouge leadership fled west along the Thai border and continued to struggle against the then Heng Samrin government and Vietnamese troops.

In 1998, Khmer Rouge’s last stronghold was integrated into the government, ending decades of civil war in Cambodia.

Hun Sen said at the ceremony that he decided and chose to go to Vietnam to reorganize the struggle.

The Khmer Times quoted Chhang Youk, who is also a survivor of the Khmer Rouge’s killing fields, that “June 20” has similar significance for Vietnam and Cambodia because it's for both countries, the day marks the beginning of the end of the Khmer Rouge regime.

“The destruction of this horrendous regime had implications for the Cambodian people and the region. It is for this reason as well as many others that we need to document, remember, commemorate not only this day but all of the history surrounding this day and the region, which was consequential to Cambodia, Vietnam, and the ASEAN region’s history,” he said.

“This day is also important because it marks an important instance, in which Cambodians and Vietnamese worked together for the common good. Our relationship with Vietnam will always be a special one to maintain peace along the border of the two countries,” he added. 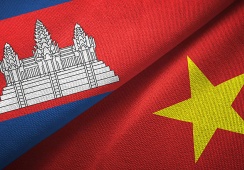 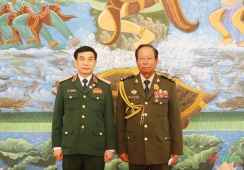 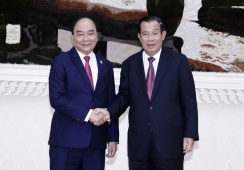