China's move at this moment might go unnoticed at a time when the world focuses on fighting the coronavirus.

China has launched two research stations on Vietnam’s Truong Sa (Spratly) islands in the South China Sea when the world is busy with fighting the new coronavirus.

The research facilities that are set up on Da Chu Thap (Fiery Cross Reef) and Subi Reef in Truong Sa are “under the Integrated Research Center for Islands and Reefs of the Chinese Academy Sciences (CAS), feature a number of labs on ecology, geology and environments,” according to China’s state-run Xinhua News Agency.

The CAS planned to “promote innovation capability and the supply of public service products of marine science and technology to meet the needs of both China and other littoral countries around the South China Sea.”

China in recent years has transformed reefs and islands into outposts equipped with harbors, airstrips, missile shelters, communications facilities, expanding its ability to monitor its and rivals’ activities in the South China Sea of which Beijing's claims cover more than 80%.

Filipino Inquirer quoted maritime security expert Collin Koh as saying that the launching of the two new research centers by China at this time is a significant development.

“Some may think that the ongoing coronavirus pandemic would have distracted Beijing from these maritime flashpoints,” he said.

Koh believes China will remain consistent in its activities in the disputed waters. However, because of the pandemic that has swept across the globe, its actions might go unnoticed.

“The world is likely to overlook such developments given their priority focus on the virus. This should apply to the other South China Sea parties too,” Koh said.

From late 2013 to 2014, China expanded the reef to make it the largest manmade island in Truong Sa archipelago. Currently, the reef has underground facilities that can accommodate large vessels, Thanh Nien reported. 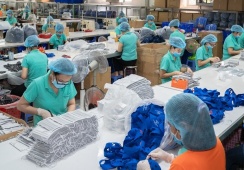