The Hanoi chapter of the Vietnam - Cambodia Friendship Association will boost communications to raise awareness of the public of the bilateral friendship.

The fifth congress of the Vietnam-Cambodia Friendship Association (VCFA)'s Hanoi chapter   on August 10 agreed to further contribute to consolidating and fostering friendship, solidarity, and comprehensive cooperation between the two countries as well as between the capital city and Cambodian localities.

For the 2022-2027 tenure, delegates said the chapter's operation will be overhauled to deepen Vietnam-Cambodia and Hanoi-Phnom Penh relationship.

According to the organization's chairwoman, Le Kim Anh, the VCFA will boost communications to raise public awareness of bilateral friendship, promote investment and trade between Vietnamese and Cambodian companies, and provide effective assistance to Cambodian students in Hanoi.

In his congratulatory remarks, Cambodian Ambassador to Vietnam Chay Navuth said the VCFA and its municipal chapter have worked effectively to cultivate solidarity and refute arguments  that undermine the relationship between the two countries.

The diplomat affirmed that the Cambodian side is committed to coordinating with the local friendship organization in promoting the sound relations between Vietnamese and Cambodians for peace, independence and development in each nation and in the region.

The congress elected a new executive board for the 2022-2027 tenure, which consists of 33 members and is still headed by chairwoman Le Kim Anh.

During the 2016-2021 period, the chapter and its member units launched a series of charitable activities, including the provision of free medical check-ups and donations worth hundreds of billions of VND to the poor in Vietnam and Cambodia.

They also supported Cambodians, Vietnamese expatriates in Cambodia and students from the neighboring country in Hanoi during the Covid-19 outbreaks in 2021. 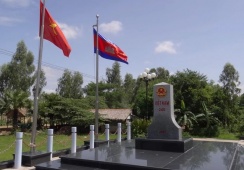