The picturesque road along the southern coast and the craggy high pass in the mountains of northern Vietnam capture the love of any genuine backpacker.

The UK-based travel website has recently listed Hai Van Pass and Ha Giang Loop- two famous tourist attractions in Vietnam- among its list of “Top 10 the most thrilling scenic drives in all of Asia”.

According to Cynthia Levy, a travel blogger from Thetravel.com, Asia has some of the world’s most dramatic scenery so it makes sense it would be home to some of the most thrilling drives, as well.

“Asia is one fascinating continent to visit. The main reason is its diversity and range of environments, and there is something attractive and unique about every country,” she wrote.

“Additionally, the continent has some of the best landscapes in the world. When touring Asia, one will encounter many things such as huge mountains, valleys, rivers, extreme rivers, and weather,” she added.

Hai Van Pass, which linked the two cities of Hue and Da Nang in the central region of Vietnam ranked tenth on The Travel’s list.

For Cynthia, Hai Van Pass is the most thrilling road in Vietnam. “It is a road located in the central part that moves along the coast. However, the exciting part is in the snaking nature of the road, plentiful vegetation around covered by forest, amazing views of the ocean on the other side, and various destinations it passes through,” she wrote.

Hai Van Pass is considered to be a top coastal road. It has also been featured in several films, including a 2008 Top Gear edition. It can also be challenging to travel due to its curves, sinuosity, and much more.

The pass was also praised as one of “The seven best road trips in Vietnam” by Lonely Planet in 2021.

“The Hai Van Pass is flanked by jungle-clad mountains on one side and cliffs plunging to the East Sea on the other, a dramatic setting that has made this road one of the most Instagrammed in the world,” is described.

The fact is that this tourist attraction is renowned for its scenic beauty. It is described by backpackers as “a deserted ribbon of perfection- one of the best coast roads in the world”.

“Passing through the pass by motorbike may bring the feel of seclusion for travelers that anyone should try once in their life,” Thomas Lee, a traveler from Singapore told The Hanoi Times.

“The perilous death curve, together with zigzag roads create a challenging trek for backpackers and bring incredibly unique experiences,” he said.

Thomas also suggests some “best things to do” in Hai Van Pass, including a stopover at Hai Van Quan or the gate of Hai Van Pass for admiring the surrounding exquisite landscapes. This former border gate was recognized as a national monument in 2017.

Ha Giang Loop in the northeast province of Ha Giang, Vietnam ranked third among the “Top 10 the most thrilling scenic drives in all of Asia” by The Travel.

The 350km long road loop which is moving on the mountains, with landscapes on top and a valley below is on many people’s bucket lists, according to thetravel.com.

“The road snakes through these magnificent views and vegetation that one simply can't stare at. It is worth using the road but requires one to be careful due to its snaking nature in the mountains,” it wrote.

Unlike the famous Sapa Town in Lao Cai Province which everyone has heard of, Ha Giang is a lesser-known and much less explored region often described as the most beautiful place in the North of the country.

The long loop runs through communities of at least 10 different ethnic minorities in the locality. Alongside the loop, the Ma Pi Leng Pass is hands-down the most scenic section of the drive, with jagged mountains surrounding the emerald Nho Que River.

Being named after a word in the H’Mong minority language as “the bridge of a horse’s nose”, the only 20-kilometers pass may challenge any first-time driver for its treacherous terrain, according to a local tour guide.

“Driving through the pass, all you can see are endless limestone mountain ranges and a stunning view of the sky. It is a magical scenery when you look down the stream from high above,” he told The Hanoi Times.

“In addition, you might also have to stop several times mid-way just to capture the sights in front of your eyes which are like a fairytale,” he added.

Other most thrilling roads in Asian countries listed by The Travel are the Hokkaido Scenic Byway in Japan, Rueignag Road in Taiwan (China), and The Patapat Viaduct in the Philippines, among others. 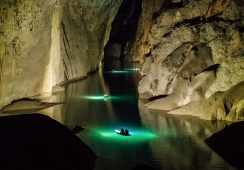 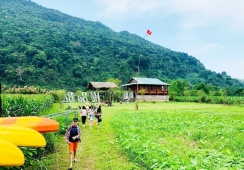 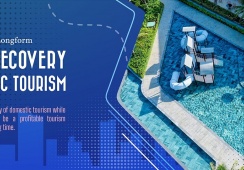