Hanoi closes street eateries and cafes as of today

The city’s authorities have decided to close street eateries, sidewalk iced tea shops and cafes as well as relics, temples and religious sites to avoid public gatherings to prevent Covid-19 from spreading.

All unessential services such as street eateries, sidewalk iced tea and coffee shops have been barred from February 16 as community infections in the city has become more serious and unpredictable.

Earlier on February 14, authorities quarantined 139 employees and guests after a Japanese man was found dead at the Somerset West Point Hotel in Hanoi's Tay Ho district. His posthumous Covid test came back positive.

This is one of the measures aimed at strengthening Covid-19 prevention and control, Vice Chairman of the Hanoi People’s Committee Chu Xuan Dung stated at the meeting of the Steering Committee on the afternoon of February 15.

Speaking at the meeting, Deputy Director of the Department of Tourism Tran Thi Van Anh informed that some religious establishments in Hanoi have been shut down.

Chairman of the People's Committee of Hanoi Chu Ngoc Anh asked local authorities to prepare different scenarios on the assumption of a large-scale COVID-19 outbreak, while taking urgent actions to investigate, trace and test those in close contact with new Covid-19 infections

Localities should be updated on the pandemic situation in provinces of Hai Duong and Quang Ninh so as to trace returnees from Covid-19 affected zones for testing and quarantining, Dung noted, urging them to inspect the compliance with regulations on entry, medical isolation, and pandemic prevention and control.

Statistics from the Center for Disease Control (CDC) show that at 6 a.m. on February 16, two cases of Covid-19 were detected in the previous 12 hours, raising the national count to 2,271, of which 1,372 were transmitted locally.

Both the two new cases were in Hai Duong province, where blockade has been imposed across the entire province since 0:00 a.m. February 16. Also another 26 Covid-19 patients have been discharged from hospital, all in Hai Duong.

A total of 128,080 people are being quarantined nationwide. 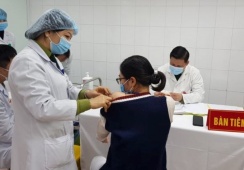 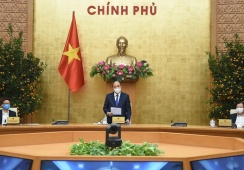 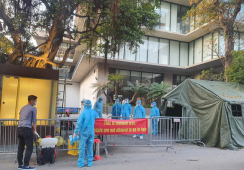