Hanoi supports Luang Prabang in the fight against Covid-19

With love and sharing, Vietnam’s capital city Hanoi has presented US$20,000 to Luang Prabang province of Laos to help it fight against the Covid-19 pandemic.

Head of Vietnam Consul General in Luang Prabang in Laos Nguyen Dang Hung handed over the donation to the governor of the province of Luang Prabang, Khamkhan Chanthavisouk on October 5.

This is a meaningful gift from the Communist Party Committee of Hanoi, the city’s government, and people’s organizations with the aim of helping Luang Prabang Province fight the pandemic. Luang Prabang is one of the eight northern provinces of Laos that have received the support of Hanoi.

At the handover ceremony, Hung stressed that the administration and the people of Hanoi wish to join hands with their Luang Prabang peers in this fight. He was also confident that the province will soon bring the pandemic under control.

In response, Khamkhan Chanthavisouk expressed his deep gratitude to the Party committee, government, and people of Hanoi for the donation, adding that he looks forward to receiving more support and experience sharing from Vietnam in the combat against the Covid-19.

He also wished that the relations between the capital Hanoi and the province of Luang Prabang would be further strengthened in the future.

The Vietnamese Consulate General in Luang Prabang will continue to deliver donations from Hanoi to seven Lao northern provinces in the days ahead.

Over the past time, the Vietnamese Party, Government, and people have offered timely, valuable, and effective assistance to the neighboring country. 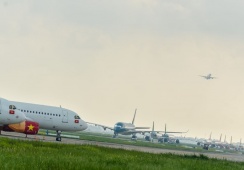 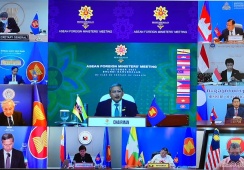