Vietnam said it maintains dialogues and consultation with the US to handle problems for mutual interest.

Vietnam has seriously implemented commitments and trade agreements dealt between Vietnam and the US and multilateral trade agreements in response to Washington’s accusation that Vietnam manipulates its currency to gain an unfair competitive advantage.

“The government of Vietnam attaches special importance to the economic and trade relations with the US,” Spokesperson Le Thi Thu Hang of Vietnam’s Ministry of Foreign Affairs (MOFA) said at a press conference today [December 17].

Vietnam maintains constructive dialogues and consultation with the US to handle problems in bilateral economic and trade relations in a manner that’s good for the both sides and the mutual interest, Ms. Hang said in a statement.

In the US Treasury’s report released on December 16, Vietnam was deemed to have intervened deeply in currency markets to prevent effective balance of payments adjustments.

Shortly after the accusation, the State Bank of Vietnam (SBV) said Vietnam’s trade and current account balances favorable to Vietnam with surpluses with the US are “result of factors related to the characteristics of the Vietnamese economy" and not for unfair trade gains.

The spokesperson said past 25-year relationship, mostly after upgrading the status to Comprehensive Partnership, Vietnam and the US have made impressive strides in different fields, especially trade and investment.

In November, Vietnam’s Prime Minister Nguyen Xuan Phuc said at the meeting in Hanoi with the US National Security Advisor Robert O’Brien that Vietnam regards trade as a key pillar in the relationship with the US. 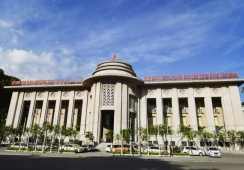 US unlikely to name Vietnam as currency manipulator: Expert