This is the opening event for the plan to launch a chain of three new stores in Hanoi.

UNIQLO, a brand of Japan-headquarted retailer Fast Retailing, will open a new store at Vincom Ba Trieu on October 28, with the expectation of becoming a shopping destination for residents and tourists to the capital.

Sharing about the UNIQLO Vincom Ba Trieu, General Director and Chief Operating Officer UNIQLO Vietnam Osamu Ikezoe said: “Since we opened a store in the northern region in 2020, Hanoi has played an important role in UNIQLO's long-term development plan in Vietnam.”

He added after a period of operation, the Japanese retailer realized the demand in the capital, so it wishes to bring the most outstanding values ​​of the LifeWear philosophy to become an indispensable part of the daily life of the capital's residents.

“The opening of three new stores, starting with UNIQLO Vincom Ba Trieu, aims to meet the needs in Hanoi, thereby boosting our presence in Vietnam,” he underlined.

The leader of the retailer said the UNIQLO Vincom Ba Trieu store, located in the most vibrant shopping districts of the capital, would attract a large number of domestic consumers and international tourists. The new store represents the lifestyle and the modern spirit of Hanoians while paying deep respect to the traditions and contemporary culture of the city.

“Through the opening, we hope that UNIQLO will continue to make positive contributions and build long-term relationships with the community here,” he said.

The products sold solely at the Ba Trieu store are created in collaboration with Hanoian artist Nguyen Bao Viet.

With the upcoming launch, the store is the fifth in the city and the 13th in Vietnam.

As part of the expansion plan in Hanoi and the northern region, two new UNIQLO stores will open this year in Vincom Tran Duy Hung and Vincom Royal City.

At a July meeting with Vice Chairman of Hanoi People's Committee Nguyen Manh Quyen in Hanoi, Noriaki Koyama, Head of CEO Office of Fast Retailing, a large retail holding company with its pillar brand UNIQLO, shared that the group will expand its business network nationwide and promote domestic production and talent development in Vietnam. 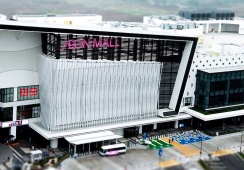