The fifth blood center in Hanoi will make it easier for people to give their blood regularly, facilitating blood donation campaigns.

The fifth blood donation center was launched this week at the headquarter of the Red Cross Association in Hanoi’s Ba Dinh District at 78 Nguyen Truong To Street, according to the National Institute of Hematology and Blood Transfusion (NIHBT).

The center, open from 8:00 am to 5:00 pm every Tuesday to Sunday, is part of an attempt to address the blood shortage in the capital city.

Speaking at the opening ceremony, Dr. Bach Quoc Khanh, director of the NIHBT, said that blood centers help ensure a regular and stable source of blood supply, support and improve the quality of blood donation in the capital city.

“Blood donation in Vietnam has seen remarkable progress over the past years but blood collection is mainly carried out by mobile blood drive, resulting in an irregular supply of blood and blood shortage,” Khanh said.

Hanoi is a highly populated city, which implies a large blood reserve, Dr. Khanh noted, emphasizing that the center will make it easier for people to donate blood regularly, contribute to forming the habit of donating blood and making blood supply sustainable.

The director expressed his hope that the center will be an address for residents in Ba Dinh District to donate their blood and get periodic health checks.

The out-of-hospital blood donation centers are expected to facilitate people's blood donation and help them get regular medical check-ups. Blood donors can know more about their health, including blood cell components, liver and kidney function, early diagnosis for the risk of blood diseases, and cancer screening, among others.

In the past three years, blood centers have welcomed more than 100,000 local residents who came to donate blood and for health checkups. Over 90,000 units of donated blood have been collected through these centers, which were insufficient for emergencies and treatment as Hanoi is home to many central hospitals with a high demand for blood.

From the beginning of 2022, tens of thousands of people have actively donated blood at these locations with around 70,000 blood units. Donating blood has become widespread in Vietnam thanks to several campaigns to improve people’s awareness of the matter.

The followings are some photos taken at the fifth blood donation center in Ba Dinh District: 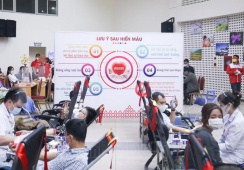 Hanoi hopes to receive 7,000 blood units from donors this month 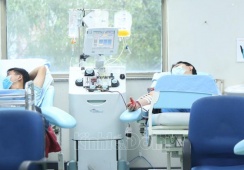 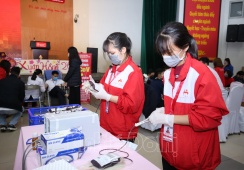