Les Misérable musical to be on stage again this month

The Vietnamese version of the French musical Les Misérable will be restaged at the Hanoi Opera House in late September.

The Vietnam National Opera & Ballet (VNOB) will perform the musical Les Misérable for two nights at 8pm in Hanoi on September 19 and 30.

The musical gained a great reputation among the public and professionals with 14 awards and 10 consecutive night performances at the 2021 National Festival of Music and Dance held in the northern city of Haiphong.

Les Misérables is a musical based on the namesake novel by French poet and playwright, Victor Hugo. Through a series of typical characters, the musical depicts the fates of people from various social strata.

In the book, Hugo’s characters step onto the stage, talking about their struggling journey toward redemption and revolution. Through the music, the stories of humanity, solidarity and the hope for a brighter future are told.

Les Miserable- Vietnamese version is a combination of skills between singing, dancing and acting on stage.

Under the direction of conductor Dong Quang Vinh, the artists will sing English classic songs such as Look Down, Do You Hear the People Sing, One Day More, and I Dreamed a Dream, whose lyrics translated into Vietnamese is played on a LED screen.

The familiar melodies associated with the fates of the main characters are elaborately choreographed and performed by Vietnamese artists Dao To Loan, Trinh Thanh Binh, Bui Thi Trang in the roles of Fantine, Javert, Jean Valjean with the international choir Hanoi Voices.

The play brings together more than 100 domestic and foreign musicians and opera artists from France, Poland, Russia, and Italy.

In addition to the talented vocal techniques of the artists, visual effects and graphics on the stage will help Les Miserable to be perfect, engaging the audiences from the opening to the final scene.

General Director of the musical and VNOB’s director Tran Ly Ly said that the production crew of the musical are all young people who used to learn the music from famous international musical schools.

VNOB also has been working with organizations such as the French and British embassies, the British Council, and the French Cultural Centre for almost one year before this impressive show debuted in November 2020. 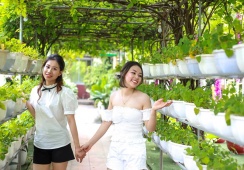 Hong Van commune- an address to experience ecotourism in Hanoi