In this summer, heat waves will be particularly intensive in Hanoi where temperatures have reached as high as 39-40 degrees Celsius.

The blazingly hot temperatures will likely keep hitting Hanoi city, as well as Vietnam’s northwest and central region in July, according to the National Center for Hydro-Meteorological Forecasting (NCHMF).

In the coming month, there will be about two or three heat waves and intense heat waves striking the city around the first week, said the NCHMF.

Heat waves will occur in combination with large-scale heavy rains. In July, there will appear one or two heavy rainstorms in the middle and in the end of the month, the NCHMF predicted.

The average temperature in July in Hanoi will be higher than the average one of the recent many years (28.7 - 29.2 degrees Celsius). The total rainfall in the month is approximately the standard of many years (280.4 - 308.0mm).

The center’s experts said that as July is still the transitional period, there will be a collision between hot and cold waves, so extreme weather such as tornadoes, hail and strong wind in the thunderstorm may occur.

According to the center, in this summer, heat waves will be particularly intensive in Hanoi where temperature have hit 39-40 degrees Celsius. The central region will also experience blistering heat with the mercury soaring to nearly 40 degrees.

In recent days, mercury in Hanoi reached its highest level on June 23, with a high of over 40 degrees Celsius. The intense heat has posed immense challenges to the daily activities of local residents, especially those who have to earn a living outdoors.

The UV index has been at harmful levels during this period. 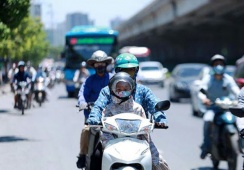