Vietnamese, who wish to apply for visas, need to bring their new passports and identity cards to verify their place of birth.

The notice said the latest move was taken after technical consultation by the Spanish authorities.

“However, people who wish to apply for a visa need to bring their new passports and valid identity cards to verify their place of birth,” the Spanish Embassy noted.

It also warned that visa granted by Spain to bearers of Vietnam's new passport would not allow their entry into countries that have not accepted the redesigned passport, even if those countries are  Schengen members.

Therefore, the embassy recommended that visa applicants, in the case of traveling to different countries in the Schengen area, contact the embassies of those countries before departing.

Earlier, on August 1, Spain announced the temporary halt of visa issuance for holders of Vietnam's new passports because they lack information regarding place of birth.

Spain's rejection followed Germany's denial on July 27 for the same reason. The Czech Republic on August 2 also said it does not recognize Vietnam's new passports as they lack the information of one's place of birth, making it difficult for verification.

At the government’s regular press meeting on August 3, Lieutenant General To An Xo, spokesman of the Ministry of Public Security,  announced that his ministry will add the place of birth on the remark page of the redesigned passport.

“The Ministry of Public Security will add holders’ place of birth on the remark page of their passports, and citizens can go to the local immigration office or Vietnam’s overseas representative agencies for this,” Xo noted.

The official stressed that MPS will coordinate with relevant agencies to add the place of birth on the personal information page of the redesigned passport.

The new passport, whose cover is blue-violet, consists of pages printed with the country’s famous landscapes and cultural heritage sites, ensuring technical safety and preventing counterfeiting. 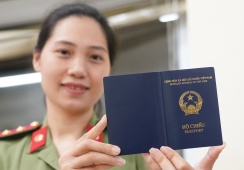