The negotiations on a free trade agreement between the European Free Trade Association (EFTA) and Vietnam are expected to finalize this year.

Ignazio Cassis, Swiss Vice President and Head of the Federal Department of Foreign Affairs, has visited Hanoi to strengthen economic ties which are regarded as fruitful with the large presence of Swiss businesses in Vietnam pouring capital in 117 FDI projects worth US$1.9 billion thus far.

The three-day trip is also aimed at sharing innovative technologies for sustainable and environmentally friendly development.

Cassis plans to launch a cooperation strategy in line with the Swiss State Secretariat for Economic Affairs’ 2021-2024 plans that will provide $70 million of development grants to Vietnam, particularly supporting its manufacturing sector, which experienced double-digit growth in the past decade.

Vice President Cassis is also expected to amplify negotiations on a free trade agreement between the European Free Trade Association (EFTA – the intergovernmental organization of Iceland, Liechtenstein, Norway, and Switzerland) and Vietnam. They expect the process to complete this year.

In the medium-term, the two sides expect to expand Swiss and European investments in the country. These investments offer Vietnam an opportunity to boost its production value in global value chains.

Vietnam and Swiss maintained a significant momentum in trade during 2016-2018 and 2020 with the two-way value at US$1 billion annually, with Vietnam having an unfavorable trade balance, according to the General Department of Vietnam Customs.

In 2019, the bilateral trade rose to $2.28 billion driven by a surge in the import of precious metals in Vietnam.

In terms of investment, Switzerland has operated 177 projects worth $1.9 billion in Vietnam as of May 2021, ranking 20 out of 140 countries and territories investing in the country.

In addition, the two countries have a large room for cooperation in politics, foreign affairs, trade, investment, and education.

The two sides have frequently exchanged high-ranking visits on the occasion of the annual World Economic Forum (WEF) in Davos.

Vietnam and Switzerland have supported each other in international organizations and forums like the UN, ASEAN, Asia-Europe Meeting (ASEM), and notably Vietnam’s membership of the UN Security Council in 2020-2021 term and Swiss membership in 2023-2024.

Switzerland is one of the first Western countries to set up diplomatic ties with Vietnam.

Vietnamese Ambassador to Switzerland Le Linh Lan attributed the 50-year close ties to their mutual trust and understanding, close political, economic, cultural, and educational, and people-to-people links, as well as the sharing of common global values. 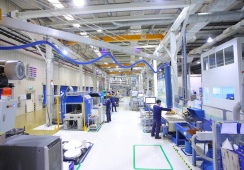