The US has unveiled a set of visa and export restrictions targeting Chinese state-owned companies and their executives involved in advancing Beijing’s territorial claims in the South China Sea.

On August 26, the US Department of Commerce blacklisted 24 Chinese companies for export restrictions due to their role in helping the Chinese military construct and militarize the internationally condemned artificial islands in the South China Sea.

On the same day, the US State Department said it was rendering ineligible for US visas a group of unspecified executives who Washington alleges have been involved in malign activities in the disputed strategic waterway.

The Department of State said it will begin imposing visa restrictions on Chinese individuals responsible for, or complicit in, either the large-scale reclamation, construction, or militarization of disputed outposts in the South China Sea, or China’s “use of coercion against Southeast Asian claimants to inhibit their access to offshore resources.”

Since 2013, China has used its state-owned enterprises to dredge and reclaim more than 3,000 acres on disputed features in the South China Sea, destabilizing the region, trampling on the sovereign rights of its neighbors, and causing untold environmental devastation, according to the US State Department.

Among a range of Chinese state-owned enterprises added in the US Commerce Department’s Entity List, China Communications Construction Co, Ltd. (CCCC), plays a significant role. It’s a leading contractor for Chinese global “One Belt One Road” strategy to develop infrastructure and trade links across Asia, Africa and beyond.

“The US will act until we see Beijing discontinue its coercive behavior in the South China Sea, and we will continue to stand with allies and partners in resisting this destabilizing activity,” the State Department said in a statement.

Dov S. Zakheim, senior advisor at the Center for Strategic and International Studies (CSIS), said the US latest move will definitely produce better results than tariffs.

He told Vietnam's Zing News that the latest move is considered a message that Washington forewarns Beijing.

Zakheim said it’s not easy to predict the Trump administration’s actions. But he argues that the US necessary action is to minimize, if not eliminate, the presence of China’s graduate and postdoctoral students who help their government steal US intellectual property.

In recent weeks, Washington has been taking tough actions against China, including plans to ban popular Chinese social networking apps such as TikTok and WeChat, and shut down the Chinese Consulate in Houston, impose sanctions on Chinese officials and entities on human rights charges, among others.

The moves follow a formal US declaration last month that Washington opposes a swath of Chinese claims in the South China Sea.

Secretary of State Mike Pompeo said the policy change was part of an effort to uphold international law against what he called a “might makes right” campaign by China to coerce and intimidate its Southeast Asian neighbors into ceding their interests in the region.

Meanwhile, Murray Hiebert, senior associate of the Southeast Asia Program at the Center for Strategic and International Studies (CSIS), told Zing News that Washington might punish Chinese state-run enterprises for environmental destruction allegations due to their support in China’s encroachment of islands in the South China Sea.

Chinese latest aggression in this strategic sea is ongoing military exercises that Beijing announced will last until August 30. 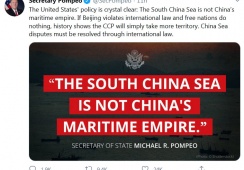 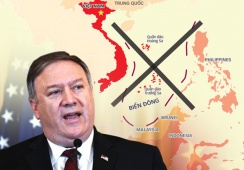 US's position on South China Sea: Strong and clear like never before 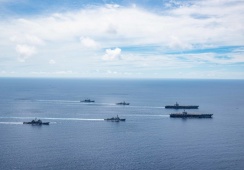