With Vietnam’s assistance, Laos will be able to develop the maritime economics of Southeast Asia’s only landlocked country.

Vietnam will continue allowing Laos to use its seaports to support the neighboring country that it has “great” and “special” relations with.

Laos will be prioritized to use and develop wharf No.1, 2, 3 of Vung Ang Port in Vietnam’s central province of Ha Tinh that borders Lao Bolikhamsai and Khammouane provinces.

This will help Laos connect to the sea and realize its goal of becoming a regional logistics center.

The support was reaffirmed at the meeting between Vietnam’s Prime Minister Pham Minh Chinh and his Lao counterpart Phankham Viphavanh in Hanoi on January 8.

Over the past years, Vietnam has facilitated the transit of goods to and from Laos and served the development of the East-West Economic Corridor.

Vung Ang Port, which facilitates cargo transportation from Vietnam to Laos, Thailand’s northeast, and Vietnam’s central region, is a deep-water port with an average depth of between 10-15 meters and capable to accommodate 50,000-dwt class vessels.

The sea trade route is significant for Laos to transform the land-locked country into a land link one and boost connectivity within the region and beyond.

The two PMs also discussed measures to boost the economic ties to be in line with the special relationship with the focus on infrastructure connection and transport (including railway, aviation, and waterways) typically with the Vung Ang-Vientiane railway project, the Hanoi-Vientiane expressway.

The seaport and the railway are among the mega projects to which both Vietnam and Laos attach great importance for both sides’ interests and the common drive.

Among those, education gains significant efforts with a cooperation program for 2021-2030. In 2021, Vietnam offered more than 1,200 sponsorships to Laos. Nearly 17,000 Lao students are studying in Vietnam, doubling that five years ago.

For further economic ties, the two government leaders suggested new policies to be suitable with their special relations, forming a stable and transparent legal framework and favorable business environment for trade and investment.

The Government of Laos strongly supports and facilitates Vietnamese enterprises. With eight pairs of international border gates, seven pairs of main border gates, and 18 pairs of secondary border gates, the trade activities as well as travel, import and export of goods between Vietnam and Laos are very favorable. 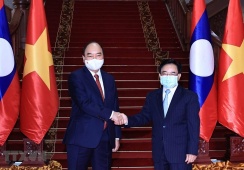