There remains great potential for Vietnamese businesses to export Halal food as Vietnam is one of the world’s largest exporters of farm produce and seafood, Deputy Minister of Foreign Affairs (MOFA) Nguyen Quoc Dung said at a conference on potential and opportunities in the Halal market in Southeast Asia, South Asia, and South Pacific.

Vietnam has about 20 items exported to Halal markets, Dung said, adding that only 50 Vietnamese firms get Halal certification each year.

Southeast Asia – South Asia and South Pacific are potential Halal markets with 860 million people accounting for 66% of total Muslims around the globe. The region consumes US$470 billion worth of Halal food in 2018, the largest spending on Halal food in the world.

Situated in the region, Vietnam is given opportunities to ship products to the aforementioned markets and other parts of the world thanks to the growing Muslim population and new consumption trends. More non-Muslims tend to consume Halal products thanks to environmental standards and food safety requirements, participants said at the event that marked the participation of foreign ambassadors, high-ranking officials from foreign affairs and agriculture ministries, and businesses.

In addition, Vietnam is geographically close to Muslim countries like Malaysia and Indonesia. Particularly, demand for Halal products in Vietnam has been also on the rise with the growing Muslim community and an increasing number of Muslim visitors.

It is time to look critically at the opportunities given by the growing demand for Halal-certified products, participants said at the conference.

Approaching Halal markets requires respect and understanding of cultural and religious values in addition to commitment and trust, he noted.

To penetrate Halal markets, Vietnam should have a suitable regulatory framework for the production, processing, and export of domestic products.

In addition, it requires unified Halal certification in different Muslim countries around the world to facilitate the export of domestic items.

Tien said MoFA and MARD will build action plans to support domestic exporters to approach Halal consumers while other agencies should focus on tourism and services heading towards those markets.

It requires a specialized agency to approach Halal markets that enable ambassadors to connect with when conducting market promotion plans and disseminating knowledge on Halal markets and Muslim culture via manual for example.

Dato’ Shariffah Norhana Syed Mustaffa, Ambassador of Malaysia to Vietnam, once told The Hanoi Times that being one of the world’s most powerful bodies responsible for Islamic affairs, Malaysia’s expertise in this field could be significant for Vietnam’s businesses. Malaysia can offer its expertise in the Halal industry to assist Vietnamese businesses in venturing into the US$2.3 trillion Halal markets.

The move becomes valuable in the context that Vietnam is making efforts to boost its export to the potential global market that is largely formed from a highly hygienic perspective.

The global halal food market has great potential and Vietnam could tap into this market if it uses its advantages, such as being a strong exporter of agricultural and aquaculture products, the ambassador said.

"The country possesses abundant raw materials including coffee, rice, agriculture, and aquaculture products which have high potential to be turned into Halal end products," she said.

She said Vietnamese businesses could have faced some challenges relating to the issuance of Halal certificates, whilst generally lacking information about the market, business culture, and consumption patterns. All of which hinder them from becoming deeply involved in the Halal market.

"Furthermore, many business owners in Vietnam still do not understand the Halal economy, unlike Japan, Korea, Russia, and Taiwan. Continuous engagements, training, dialogues with enlarged stakeholders must be initiated in order to gain further Halal traction," she noted. 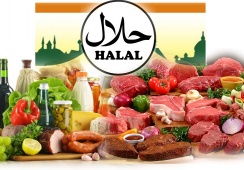