The country’s vaccine passport follows standards issued by the World Health Organization (WHO) and the European Union (EU) that are being applied by 62 nations.

The passport will be displayed on PC Covid-19 or Digital Health (So suc khoe dien tu) apps. If people don’t have the apps, they can get their passports by accessing the health ministry's portal and filling in the necessary information. They will then receive the passports by email.

The passport template was revealed by the health ministry last December, which comprises information like one's name, date of birth, the disease which they're vaccinated against, and the number of shots and date of vaccination. Data will be encoded into a QR code.

The vaccine passport's QR code will expire after 12 months. Following their expiry, the subject will be notified and a new QR code will be created instead.

The vaccine passport will be used in conjunction with other personal identification documents like identification cards. Data that identify people will not be stored in QR codes for security reasons.

Vaccination for Vietnamese children from 5 to 11 started on April 14 in the northern province of Quang Ninh, and the children will also be granted vaccine passports like people in other age groups. 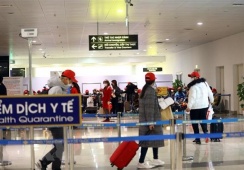