ASEAN and Australia will accelerate the action plan for the 2020-24 period, focusing on economy-trade-investment, anti-terrorism, environmental protection and climate change.

ASEAN and Australia need to maintain the momentum of regional economic linkages and ensure efficient implementation of major trade deals to support economic recovery and businesses affected by the Covid-19 pandemic.

Deputy Minister of Foreign Affairs and Head of Vietnam’s ASEAN Senior Official’s Meeting (SOM) Nguyen Quoc Dung made the statement during the 33rd ASEAN-Australia Forum held online on March 17, pointing to the significance of the ASEAN-Australia-New Zealand Free Trade Area (AANZFTA), the Regional Comprehensive Economic Partnership (RCEP), and the Comprehensive and Progressive Agreement for Trans-Pacific Partnership (CPTPP) for regional economy.

“Countries should continue to build trust, maintain dialogue and resolve differences via international laws for peace and stability, which lay the foundation for cooperation towards recovery and sustainable development,” said Dung.

At the meeting, Deputy Secretary of the Australian Department of Foreign Affairs and Trade Justin Hayhurst stressed the importance of ASEAN in keeping its central role to facilitate dialogue and cooperation in Asia-Pacific region.

According to Hayhurst, Australia gives priority to its relations with ASEAN, as such it is ASEAN’s 7th partner to maintain annual meeting with the bloc.

Hayhurst informed of the AUD500 million (US$391 million) investment package's implementation, which had been previously announced at the ASEAN-Australia summit last November, to support a comprehensive recovery in the Southeast Asia; a AUD1-million aid (US$783,000) for ASEAN’s Comprehensive Recovery Framework; a AUD1-million (US$783,000) for the ASEAN Response Fund, and AUD21 million (US$16.4 million) for the ASEAN Center for Public Health Emergencies and Emerging Diseases (ACPHEED).

ASEAN and Australia agreed to cooperate closely to maintain peace and stability in the region, especially in the East Sea, in which they expressed strong support for ASEAN’s stance in implementing the Declaration of the Conduct of the Parties in the East Sea (DOC) and building the Code of Conduct in the East Sea (COC) in line with international law and the 1982 UN Convention on the Law of the Sea (UNCLOS).

Regarding the current situation in Myanmar, the countries called for efforts to ease tension and violence, while expressing their commitment to supporting Myanmar find a long-term solution for stability and maintaining the country’s ongoing democratic transition process. 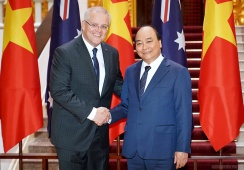 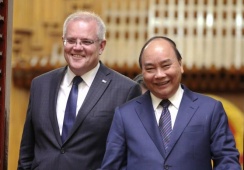 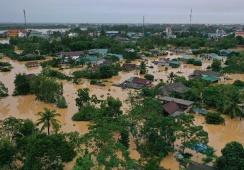