Vietnam's Prime Minister Pham Minh Chinh and German Chancellor Olaf Scholz make their annoucements to the media after the two sides have a private meeting.

The government leaders of Vietnam and Germany on November 13 asserted that the two nations are key partners and that the governments will further the “strategic relationship”.

“The first official visit of German Chancellor Olaf Scholz to Vietnam marks a new stage of the Vietnam-Germany relationship,” Prime Minister Pham Minh Chinh said at a press conference after the two government leaders had had a private meeting.

“The visit will further enhance the ‘strategic partnership’ between the two countries and expand cooperation activities for the sustainability of the two nations, thus assisting the settlement of global issues,” the Vietnamese prime minister said.

“Amid the complicated developments of the world and a difficult global economy, the two nations agree to bolster their mutual partnership, which focuses on political stability, sustainable socio-economic growth, and responses to climate change,” he said.

Vietnamese and German agencies have ratified and signed three agreements on national defense, energy transition, and labor and vocational training, PM Chinh said, adding that the signing of the agreements means a more robust and more effective ‘strategic partnership’.

“Vietnam has performed well and strictly followed the European Commission’s recommendations on Illegal, Unreported and Unregulated Fishing for sustainable development of the aquaculture sector,” he said.

Furthermore, PM Chinh thanked the government and people of Germany for the utmost assistance provided for Vietnamese socio-economic growth, including the provision of Covid-19 vaccines.

He suggested Germany continue to provide concessional loans for Vietnamese partners, including loans under the official development assistance (ODA) programs.

In return, German Chancellor Olaf Scholz said that the relationship between Vietnam and Germany has grown for many years.

He said more than 180,000 Vietnamese and Vietnamese-original people live and work in Germany.

The "strategic partnership" between Vietnam and Germany has developed for more than ten years, and Germany has been present in many local projects, Chancellor Olaf said.

The German government leader said that the two countries need to explore other markets, expand their supply chains and look for new material supplies and production sites.

He affirmed that Vietnam is one of Germany's major partners and the EVFTA, which became effective in 2020, is essential for the two sides to bolster the bilateral relationship.

Prime Minister Chinh said that Vietnam and Germany agree to cooperate and support each other in their international activities related to the United Nations, ASEAN, the EU, and the Asia-Europe Meeting (ASEM).

"The two nations are highly aware of the importance of a secure, safe, sustainable, and free transport in the East Sea (South China Sea)," PM Chinh said.

He added that the two governments hope all conflicts and disputes will be resolved by international laws, especially the United Nations Convention on the Law of the Sea (UNCLOS) initiated in 1982. 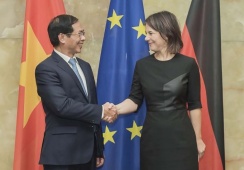 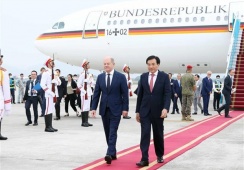