A US-based news introduced the Vietnamese bridge along with famous architectures in Paris and London.

Insider, a leading US-based news site, on April 16 included Vietnam's Golden Bridge in a list of stunning bridges in the world along with many other famous architectures such as Pont Alexandre III in Paris or Tower Bridge in London.

Nested on the Paradise Garden, the Golden Bridge acts as a special and convenient transit to take visitors from the mountain foot or French village to Le Jardin D’Amour gardens. The bridge spans 12.8m wide and 150m long and comprises 8 arches, the longest of which is 21.2m. It was officially inaugurated in early June 2018 as a new tourist product of SunWorld Ba Na Hills complex. What strikes the hearts of all overwhelmed visitors here is the dabbled and mossy giant hands supporting the bridge.

The Golden Bridge has been praised by many foreign news sites, travel magazines such as Time, CNN, and Guardian in the world.

Earlier this month, in Wanderlust’s list of favorite things in Vietnam, the international magazine recommended tourists should take photos and post with #Golden Bridge hashtag on their social media.

CNN listed the Vietnamese bridge among the 124 best travel photo theme of 2018.

In 2018, The Time magazine listed it in its list of top 100 World’s Greatest Places for 2018. AFP also voted Golden bridge as one of Top 106 photos of 2018. Recently, Reuters has called the bridge among the top odd and unusual photo destinations of 2018. 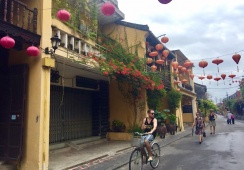 Int’l magazine recommends favorite things to do in Vietnam