Local experts said it’s necessary to give significant care and investment in the culture sector amid the changing world.

Today, Vietnam launched the National Cultural Conference to review its cultural strategies 35 years after Doi moi (renewal) and set missions for the culture and arts sector in the 2021-2026 period and vision to 2045.

The event, the second of its kind after the first was held in 1946 with the chair of late President Ho Chi Minh, is aimed to collect ideas for the development of culture.

Featuring the on-site meeting of some 600 delegates and virtual conference connected to all 63 cities and provinces nationwide, the 2021 national cultural conference is expected to continue the mission “culture lights the way for the nation.”

The event will re-systematize the Communist Party of Vietnam (CPV)’s viewpoints and late President Ho Chi Minh’s thoughts about culture.

Accordingly, it sets up a series of goals for the sector in the future, with improving public awareness of the role of culture; building sets of cultural values guiding behaviors and lifestyle of people, artists, and the whole society; changing mindset in the cultural management with a focus on dissemination of media; developing manpower in the cultural sector; building culture in state agencies; building national cultural programs; developing cultural industry together with boosting Vietnam’s engagement on international cultural agenda; building Vietnam’s culture and arts sector imbued with traditional values and increasing investment in the cultural sector.

“We must promote those values to create a national “brand” to attract the world, contributing to raising the national pride, and widely promoting cultural values," Trong said.

To pursue the goal, it needs to preserve and inherit the traditional values and promote the strengths of Vietnamese people in the drive. In this regard, culture must be placed in the same position with economy, politics, and society, he emphasized.

Hanoi – culture must be an endogenous force for city’s development

Addressing the national event, Nguyen Van Phong, Deputy Secretary of the Hanoi’s Party Committee, said culture must be a key factor for the development of the millennium city.

Phong said that Hanoi, which is recognized by UNESCO as a “City for Peace”, “Creative City”, Hanoi has a multi-layered culture with creativity at its heart. The city is embracing a new economic and urban development model driven by creative design, which honors both its youthful population, its craft heritage, and the growth of technology.

“Bringing Hanoi’s culture and people into great spiritual values, an endogenous resource that determines the sustainable development of the capital” is one of three major missions that the municipal authorities are tasked with in the 2021-2026 term," Phong said.

To make the goal possible, he said the city has built people-centered plans in the cultural sector, affirming that people are both creative subjects and targets of Hanoi’s development policy.

The city will pour significant investment into the sector and mobilize strengths to make “Creative City” a new brand recognized internationally, along with the city’s development goals by 2045.

"The city will focus on creating a healthy cultural environment at the grassroots level, among residential zones, in public places, and in state agencies to disseminate the values in the society," Phong said.

To serve the long-run development, it needs to continue maintaining the cultural value system that inherits the millennium-long culture of Hanoi, the ancient imperial city. At the same time, it continues preserving long-lasting cultural values with the support of digital transformation.

The last but not least, Hanoi will enhance relations with more than 100 cities worldwide, including world heritage sites, to boost its globalization.

According to Minister of Culture, Sports and Tourism Nguyen Van Hung, the conference plays a crucial role in nation-building. “It’s our mission to initiate the culture-based national prosperity with Vietnamese people being patriotic, righteous, compassionate, and creative in developing the country,” Hung told local media.

Culture has been designed to carry its own missions in different periods of time, Long told The Hanoi Times, saying that the mission of culture in wartime was to regain independence and it is now identified as an endogenous factor, the spiritual foundation of the society, and the driving force for the development.

Developing culture requires both mindset changing and investment, which are crucial to building long-term and well-prepared cultural programs. It’s necessary to give enough care and investment to the cultural sector, Long said.

Without a long-term vision, Vietnam’s culture might be spoiled by wrongdoings, unstandardized, and rascality, he warned.

For that reason, it needs to build long-term missions in which intellectuals and artists are entrusted with playing a crucial role. With this in mind, Vietnam has the foundation for being prosperous, the expert emphasized.

According to Associate Prof. Bui Hoai Son, a member of the National Assembly’s Culture and Education Commission, the problem for Vietnam is the lack of standardized cultural values for people to follow.

He said it’s important to address pressing issues that Vietnam is facing in terms of culture. There should be an exemplary cultural value system covering different aspects of life, he noted. 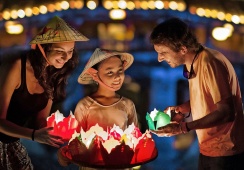