The Vietnam-Japan Environment Week will open up opportunities for the two countries’ businesses to carry out fresh projects in the field of natural resources and the environment.

The second version of Vietnam-Japan Environment Week was launched on December 16 via an online platform as part of the cooperation plan between the two countries on climate change response.

The event was co-hosted by the Vietnamese Ministry of Natural Resources and Environment (MoNRE) and the Japanese Ministry of the Environment with a view to meeting the target of carbon neutrality by 2050, which was signed by Minister Tran Hong Ha and Minister Yamaguchi Tsuyoshi on November 24, within the framework of Vietnamese Prime Minister’s visit to Japan.

Addressing the kick-off ceremony, Deputy Minister of Natural Resources and Environment Vo Tuan Nhan highlighted the event’s significance as a means of enhancing substantive cooperation in the field of environmental protection, along with facilitating a wider response to climate change between the two countries.

A range of activities such as online seminars and virtual exhibitions will be held during the event amid the increasingly serious evolution of the Covid-19 pandemic, focusing on opportunities to exchange, contact and do business between enterprises of Vietnam and Japan.

Moreover, the second version of Vietnam-Japan Environment Week will continue to open up many cooperation opportunities in which organizations and businesses of the two countries can formulate fresh cooperation projects in the field of natural resources and the environment in the coming time.

According to Japanese Deputy Minister of the Environment Ooka Toshitaka, the Japanese Prime Minister once stated that he would provide support to help Vietnam achieve the goal of carbon neutrality by 2050 by devising long-term policy strategies regarding the implementation of future projects.

On the occasion, the two sides witnessed the launching ceremony of a waste incineration plant project based in Vietnam's northern province of Bac Ninh, which is the outcome of the first Environment Week held in 2019.

Japanese Ambassador to Vietnam Takio Yamada said that the project is the manifestation of Japan-Vietnam friendship relations and it is becoming a model for other localities to implement projects on energy recovery from combustion.

Takio Yamada expressed his hope to provide further support to local projects linked to carbon mitigation in the time ahead.

A carbon-free society requires environmental infrastructure. The electricity generation from waste not only creates renewable energy but also contributes to reducing plastic waste, improving the quality of the living environment for people. This is a must for hot and humid Asian countries. 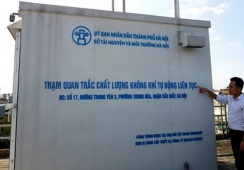 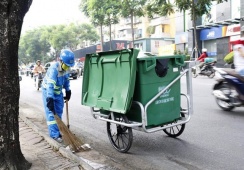