Vietnam hopes the tournament will be the platform for its players to perform at the Southeast Asia Games (SEA Games), which will be held in Hanoi in May 2022.

Vietnam defeated Singapore 7-0 in its opening match held on February 19 in Cambodia at the AFF (ASEAN Football Federation) U23 Championship.

Before the match, Malaysia-based Goal reported that “Singapore face an uphill task against Vietnam to stay alive in the tournament.”

Speaking at the post-match press conference, the Vietnamese team’s head coach said his team was lucky to score a goal early to clear mind then it was easier to play, giving some fair judgment to Singapore.

“Singapore is not weak, but the absence of many players (due to Covid-19) after the opening match against Thailand made their plans significantly affected. It is difficult to plan when there are only 14 people in hand.”

After losing to Vietnam, Singapore stopped at the tournament. However, coach Nazri Nasir said that this defeat still brings useful lessons. He said “Vietnam is a strong team and we tried to do what we can. Through this tournament, the players have shown their roles and abilities, contributing to the team. Being in the same group with competitors like Thailand or Vietnam helps us realize what needs to be improved to prepare for the upcoming Southeast Asian Games (SEAGames).”

Dinh The Nam of Vietnam wants to use this competition as the platform to develop players for SEA Games that will be held in Hanoi in May 2022. Most of the players have been picked based on their performance in the Vietnam U21 National Championship.

The tactician expected good players would be added to Park Hang-seo’s team which will compete at SEA Games in a few months.

“My players are very young, all about 20-21 years old, so we want them to train themselves and gain experience in this tournament. Moreover, we are also looking for additional players for U23 Vietnam to attend the SEA Games.”

Nam gave good remarks to 4-5 players who are qualified to attend the upcoming SEA Games. However, all decisions are up to head coach Park Hang-seo, he added.

The experienced coach had previously led Vietnam’s U16 team to the quarterfinals of the AFC Championship in 2016 and chance has previously worked with a number of players of this squad.

The next match for Vietnam would be against Thailand on February 22.

The tournament takes place in Cambodia from Feb 14 to Feb 26 with the participation of nine regional teams, except for defending Indonesia is absent due to Covid-19. 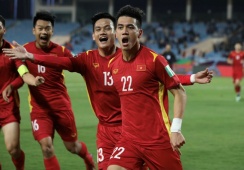