The trip has further deepened the friendship and cooperation between Vietnam and Europe in the fields of politics, investment, and Covid-19 response.

Chairman of the National Assembly (NA) Vuong Dinh Hue and a high-ranking delegation of the NA has returned to Hanoi today [September 12], successfully concluding the  Europe tour between  September 5 and 11.

During the seven-day trip to Austria, Belgium, and Finland, Hue and his delegation had had over 70 meetings with their European counterparts to reaffirm Vietnam’s foreign policies of being an active and responsible member on the global stage.

A highlight during Hue’s trip was to show Vietnam’s strong efforts in pursuing vaccine diplomacy and seeking greater cooperation in the Covid-19 fight.

The participation of the NA Chairman in the fifth World Conference of Speakers of Parliament (WCSP5) in Austria demonstrated Vietnam’s commitment to focusing on multilateral diplomacy.

His visits to the European Parliament, European Commission, Belgium, and Finland have further deepened the friendship and cooperation between Vietnam and Europe in the fields of politics, economy, investment, trade, science, innovation, education, culture, and Covid-19 response.

“Vietnam welcomes major Finnish companies to invest in the country, and take advantage of the EU-Vietnam Free Trade Agreement [EVFTA].”

Chairman Hue said during a meeting with Anna-Kaisa Ikonen, Mayor of Tampere – Finland’s second-largest city, in Helsinki on September 11, one day before leaving Europe.

According to Hue, Vietnam aims to further attract foreign direct investment (FDI) to grasp opportunities from the ongoing global shift in supply chains and to speed up economic recovery in the post-pandemic period.

“Vietnam and Finland could strengthen cooperation in potential fields such as hi-tech, telecommunications, renewables, environment, waste treatment, IT and smart city,” Hue said.

He added over the past years, Vietnam has been focusing on promoting the development of innovative startups and ecosystems by promoting the linkage between universities, research institutes, and innovative centers.

“The Vietnamese Government identifies favorable policies as a key factor to attract both domestic and foreign investment funds,” Hue continued.

During the meeting, Mayor Anna-Kaisa Ikonen noted Tampere is Finland’s major industrial hub and large Finnish companies are looking for investment opportunities in Vietnam in digitalization, IT, smart city, or renewables.

On the same day, Hue held a meeting with President of Siemens Energy AG Christian Bruch, the company is one of the key investors in energy infrastructure in Vietnam.

Hue said energy security is a priority for Vietnam as the country aims to maintain an average GDP growth target of 6.5-7%.

Given the ongoing Covid-19 outbreak in Vietnam, Hue looked for Siemens’s support in gaining access to vaccines supplies and medical equipment to soon contain the situation and avoid disruption to the supply chains.

“In the coming time, Vietnam would continue to revise business regulations to ensure a healthy and transparent business environment for both domestic and foreign companies,” Hue added.

For his part, Bruch said Siemens Energy has an interest in energy projects in Vietnam and plans to further invest in this field.

Bruch added the company has been working with the German Government to provide vaccines for Vietnam and would continue to press on this issue. 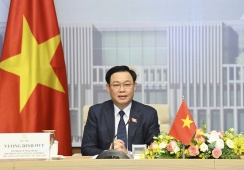