Vietnam has so far received nearly 12 million vaccine doses via the COVAX Facility.

“With this donation, France is demonstrating its solidarity with Vietnam through these difficult times: We stand together with the people of Vietnam, as the country is facing a severe pandemic wave, by supporting vaccination efforts launched by the authorities,” said Ambassador of France to Vietnam Nicolas Warnery.

He said this support is in line with the longstanding and successful cooperation between France and Vietnam in the medical field.

“In the spirit of the strategic partnership and sincere friendship that links Italy and Vietnam, Italy stands close to the Vietnamese Government and people in the fight against Covid-19,” said Ambassador of Italy, Antonio Alessandro.

He added that Italy committed to donating 15 million doses to the low and middle income countries, starting from those most in need, including Vietnam.

With the delivery of vaccines donated by France and Italy, Vietnam has received 11.73 million doses of Covid-19 vaccines via the COVAX Facility. The vaccine sharing facility is co-led by WHO, Coalition for Epidemic Preparedness and Innovations (CEPI), GAVI - the Vaccine Alliance, and UNICEF as a key delivery partner.

French and Italian contributions add to the #TeamEurope (European Union and its Member States) support to help Vietnam fight the pandemic.

THe #TeamEurope is the 2nd biggest donor to COVAX, with US$2.8 billion. An EU budget support grant of EUR19 million was transferred in 2020 to the State Treasury of Vietnam that provides additional fiscal space to implement relief policies. Many other EU and bilateral programs, including from Italy and France, are dedicated to supporting Public Health and Medical Research & Innovation in Vietnam.

Speaking at the handover ceremony held in Hanoi today, Deputy Minister of Foreign Affairs To Anh Dung expressed his appreciation for the donations of the governments of France and Italy as well as for the support of COVAX in ensuring equitable access to Covid-19 vaccines.

Deputy Health Minister Tran Van Thuan highlighted that Vietnam would quickly distribute the donated vaccines to its provinces and ensure that the vaccines would be used effectively.

“We are grateful to the governments and peoples of France and Italy for sending additional doses of vaccine through the COVAX Facility”, says Dr Kidong Park, United Nations Resident Coordinator ad interim and the World Health Organization (WHO) Representative in Vietnam.

“As we get more vaccines for the country, it is critical for the Government to provide vaccines strategically to the people who need it the most, based on priorities. This means protecting health care workers and frontline workers, the elderly, people with co-morbidities, and those who are at highest risk of severe diseases or deaths,” Dr. Kidong Park emphasized.

“UNICEF welcomes the donations of Covid-19 vaccines by the Governments of France and Italy through the COVAX dose-sharing mechanism, which allows well-supplied countries to share vaccine doses with other countries to help protect the most at-risk populations globally”, said Lesley Miller, UNICEF Deputy Representative.

“Equitable access to Covid-19 vaccines represents the clearest pathway out of this pandemic for all of us — children included, and these donations are an important step in this direction.”

To date, over 30 million vaccine doses have been administered in Vietnam, with more than 5.5 million fully inoculated. The additional vaccines will help the Ministry of Health to expand coverage and reach more people from priority groups, including the elderly and those with underlying conditions, contributing to attaining the country’s target of vaccinating more than 70% of the population by the end of the first quarter of 2022. 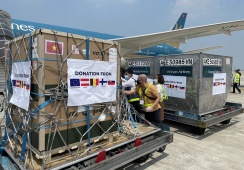