Overweight and obese rates are on the rise across all age groups and in both urban and rural areas.

The prevalence of overweight and obese children in Vietnam, especially in big cities, has more than doubled over the past ten years, according to recent nutrition research conducted by the National Institute of Nutrition under the Ministry of Health (MoH).

By 2020, for every 100 children between the ages of five and 19, 19 are either overweight or obese, a sharp increase compared to the figure of 8.5 in 2010, according to the National Institute of Nutrition.

The report noted the rate of overweight and obese children reached 26.8% in urban areas, 18.3% in rural districts, and 6.9% in mountainous regions.

Deputy Minister of Health Do Xuan Tuyen said a nutritional census, the largest of its kind so far in Vietnam, was conducted over 22,400 households from 25 provinces and cities in 2019. The aim of the investigation is to collect indicators of anthropology, micronutrients, individual diets as well as information on food security and food hygiene.

"Overweight and obese rates are on the rise across all age groups and in both urban and rural areas, leading to an uncontrolled increase in dietary-related non-communicable diseases," Tuyen warned.

He added the survey results showed that the national strategy on nutrition for the 2011-2020 period achieved many important results. However, it has yet to improve micronutrient deficiencies or overweight and obesity rates among adults.

Rana Flowers, the representative of the United Nations International Children's Emergency Fund (UNICEF) in Vietnam, also pointed out that the country is facing an overweight and obesity burden.

She warned of an increase in the consumption of soft drinks and fast food in schools across urban areas. Particularly, meat consumption is climbing from 84 grams per person per day in 2010 to 136.4 grams in 2020, and even to 155.3 grams in cities.

The National Institute of Nutrition recently published the results of the study on nutrition, which was conducted in roughly a year on 5,028 students aged 7-17 from 75 schools in Hanoi, Ho Chi Minh City, the northern province of Thai Nguyen, the central province of Nghe An and the southern province of Soc Trang.

It found that overweight students tend to consume more protein-rich food. Many students, including those who are not overweight, tend to pursue unhealthy food habits, consuming sugary drinks and sweet food.

Primary school students tend to consume more high in energy and protein foods than recommended, while secondary and high school students do not consume enough food rich in energy, iron, zinc, calcium, and other vitamins, the study found.

Vietnam is also among the least physically active countries in the world, a Stanford University survey in 2017 found. It showed that an average person walked only 3,600 steps a day, compared to 4,000 steps in the Philippines, 5,800 steps in South Korea, and 6,200 steps in China.

About 46% of students in secondary school and 39% in primary school in Hanoi and HCMC don’t get enough physical activity recommended by the WHO, according to a study by the National Institute of Nutrition.

The lack of physical activity among Vietnamese children is partly attributed to the lack of priority given to physical education in schools and families, alongside the increasing consumption of fast food and sugared beverages.

Vietnam's health ministry has set a target of controlling obesity and overweight rates among children under the age of five at 5% in rural areas and 10% in urban areas by 2025. It has launched a campaign urging citizens to walk 10,000 steps a day to stay fit.

In an interview with The Hanoi Times, Tran Khanh Van, deputy head of the Micronutrient Department under the National Institute of Nutrition, said that families should diversify their foods and add foods that are fortified with micro-nutrients and vegetables for obese children.

"In an effort to combat and prevent childhood obesity, we have compiled a list of fun ways to encourage kids to eat healthily and get active," Van said.

Firstly, make a favorite dish healthier, Van recommended. For instance, instead of spaghetti and meatballs with regular noodles, try whole-wheat pasta or even get creative and use zucchini noodles or spaghetti squash.

Secondly, drink as much water as possible. It's important to stay hydrated throughout the day. Drinking water can also make children feel full and less tempted to eat sugary, fatty snacks, Van stressed.

As the third recommendation, Van suggested families incorporate healthy snacks in meals. If kids are hungry between meals, offer fruit or veggie instead of ice cream or chips. Yogurt with berries is yummy alternatives.

"Last but not least, it is very important for children to get up and move around, as it benefits both their physical and mental health. When you exercise, your brain releases chemicals called endorphins, which can help improve your mood," Van said. 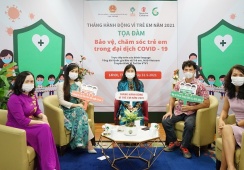 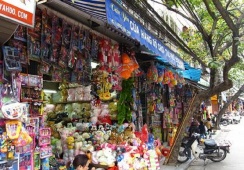