Risks of further congestion remain due to uncertainties surrounding the Covid-19 situation and limited loading capabilities from both sides.

The Ministry of Industry and Trade (MoIT) on January 18 announced its decision to set up a Steering Committee specialized in addressing the ongoing trade congestion at Vietnam’s northern border gates with China.

The Steering Committee is tasked with finding solutions to address the congestion of Vietnam’s farm produce and goods at the northern border gates, serving as a coordinator to provide information to localities regarding the customs clearance situations and regulate goods transportation to the border gates to avoid further congestion.

A report from the Import-Export Department under the MoIT noted the situation has improved in the past few days as the Chinese authorities in the Guangxi autonomous region resumed operation of several border gates, including a major one in Vietnam’s Mong Cai City.

The MoIT however, warned risks of further congestion to remain as trucks continue to flock to border gates in Lang Son, Quang Ninh, and Lao Cai provinces despite the warning.

“Such a situation could happen at any moment due to the uncertainties surrounding the Covid-19 situation and limited loading capabilities from both sides due to labor shortage as people return to their hometowns ahead of the Lunar New Year festival,” stated the MoIT.

To free the remaining trucks being stranded at the border gate zones, authorities in the three provinces are no longer processing trucks delivering fruits and frozen products from January 17.

The Steering Committee requested the Ministry of Agricultural and Rural Development to guide local businesses on requirements on production, packaging, and safe transportation, especially for fruits and frozen seafood, to avoid possible virus survival on the packages and goods.

The Ministry of Health, in the meantime, is responsible for working with northern provinces to set up a shared safety zone with China for speedy clearance.

As of January 17, Vietnam and China have 12 border gates under operation, while the number of trucks being stranded at Lang Son and Quang Ninh provinces was estimated at 2,643, down from over 3,000 in late 2021. 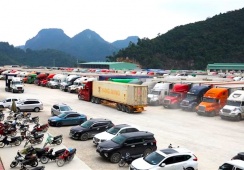 Vietnam, China seek way out for congestion at border gates 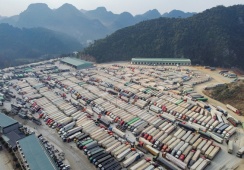 Vietnam to diversify markets amid agro-trade dependence on China