The scholars have said that the manner in which election is held in Vietnam, especially the discipline practiced during the process, is praiseworthy.

Vietnam’s national election to vote for deputies of the National Assembly (NA)’s 15th term and the all-level People’s Councils in the 2021-2026 tenure has caught attention from a large number of foreign experts.

Hanoitimes features perspectives of the observers to the biggest universal suffrage with nearly 70 million constituents.

Caitlin Wiesen, Resident Representative of the United Nations Development Programme (UNDP), said Vietnamese people are showing a stronger interest in the NA and issues related to the powerful agency, reflected by their high level of engagement in preparations for the election, the Vietnam News Agency (VNA) reported.

She showed her impression at the vibrant atmosphere across the country ahead of the elections, adding that voting for competent and qualified candidates is key to achieve equitable and sustainable development.

Chinese Ambassador to Vietnam Xiong Bo told local media that this is an important political event to select the right delegates to represent the people for the new term, devoting for the sake of the people under the leadership of the Communist Party of Vietnam (CPV).

He was impressed with the election preparations in the context of the Covid-19 pandemic. Of all, his emphasis was placed on the fact that CPV’s Secretary General Nguyen Phu Trong chaired a conference on preparing for the upcoming election.

At the same time, the National Assembly Chairman Vuong Dinh Hue visited many localities such as Haiphong, Tuyen Quang, and Quang Ninh provinces to check the preparation work.

He emphasized that China and Vietnam are both socialist countries led by the Communist Party, upholding the people-centered development ideology and developing socialist democracy with its own identity and guaranteeing the people’s rights.

Palestinian Ambassador to Vietnam Saadi Salama believed that the election will be a success as health protocols have been integrated into the preparations.

He said he has closely followed preparations for the elections in localities and seen a lot of information on mainstream media, which encourages citizens to exercise their rights and obligations.

Lao Ambassador in Vietnam Sengphet Houngboungnuang said the election demonstrates the democracy of the socialist regime in Vietnam and of a State of the people, by the people and for the people.

The election is a great festival of extensive democracy in Vietnam, during which people directly choose their representatives in state authorities at both the local level and the highest level of the country, the ambassador told local media ahead of the event.

He highlighted the active engagement of all officials, Party members and people, who are from all walks of life in preparing for and taking part in the elections to exercise their civil right, has ensured that the election will take place in a democratic and fair manner in accordance with the law, becoming a real festival of all people.

Moroccan Ambassador to Vietnam Jamale Chouaibi said Vietnam has made considerable progress in promoting gender equality, which is shown in areas of education, employment, and women’s engagement in the country’s political life.

Female legislators have made great contributions to the socio-economic development of Vietnam over the past years, he said, noting that the ratio of female deputies in the 14th NA is 26.8%, much higher than the average Asian rate of 19%.

Meanwhile, the ratio of women holding leadership positions is on the rise in many sectors, reflecting the country’s achievements in enhancing gender equality.

He said the successful organizing of election campaigns through modern means of information and communications will contribute to ensuring the safe holding of important political events.

Emeritus Professor Carl Thayer of the University of New South Wales, Canberra, said the election offers an opportunity for Vietnamese to raise voices over key matters. He said in an interview with the VNA that the Vietnamese legislature’s activities have undergone important changes during the country’s process to build and strengthen its socialist rule-of-law, especially since the adoption of the Constitution in 1992 (amended in 2001), the 2013 Constitution and the 2015 Law on Election.

The list of qualified candidates also exhibits diversity in composition with a high proportion of women and ethnic minorities, at 45% and 21%, respectively.

Dr. Rajaram Panda, Senior Fellow at Nehru Memorial Museum and Library, a think tank under the Ministry of Culture, India, said sound election preparation is a further extension of peoples’ aspirations to scale new heights in the development process, according to the Eurasia Review.

The beauty of the election process in Vietnam is that unlike in democracies where one often sees lawlessness in abundance during election times, it is organized in a very professional manner and conducted without any blemish.

The complicated and unexpected developments of the Covid-19 pandemic posed some impacts on the preparations for the event on May 23. It was therefore to ensure the success of the election and minimize impacts from the pandemic. The National Election Council (NEC) issued a number of documents directing and guiding the election activities in the context of the pandemic, including those instructing the making of voter lists and voting methods for voters undertaking quarantine in localities affected by Covid-19.

With organizations set up in localities to conduct voting at 63 local committees, 682 others at the district level, and 10,134 at the communal level, the process is clearly streamlined. There are as many as 84,767 election groups and 69,198,594 voters across the country and the discipline with which they conduct themselves is praiseworthy.

Dipanjan Roy Chaudhury, Diplomatic Editor, India’s leading financial daily Economic Times, said the election is expected to be highly transparent that uphold the rights of the people of Vietnam.

The election is held while the threats from Covid-19 are still very present and preparations have been made accordingly. Evaluation of the preparations in localities across Vietnam showed that even though they have planned for scenarios when there are local outbreaks, prevention and control efforts still need to be prioritized and guards must not be let down to ensure the election is held safely and efficiently. This is the first-time health protocols have been integrated into preparations.

The National Assembly is expected to further foreign policy goals as well as economic objectives outlined by the last party congress.

Supalak Ganjanakhundee, an expert from Thailand’s Institute of Southeast Asian Studies (ISEAS) said in an interview with VNA correspondent in Bangkok that Vietnam is a bright spot in terms of diversity and balance in gender and ethnicity in its law-making body.

This policy will be a driving force to gather strength from various fields to serve the management of the country, he said, explaining that the consultation and introduction of candidates in three rounds and five steps that Vietnam applies is an effective method to select suitable candidates for the country's general development guidelines and policies.

Endar T.D. Retnoastuti, Head of Bureau of the Committee for Inter-Parliamentary Cooperation of the Indonesian House of Representatives, and member of the Indonesia-Vietnam Parliamentary Friendship Group emphasized the significance of the upcoming general election to the NA amidst the Covid-19 pandemic.

He said in an interview with VNA that keeping the role of the legislature endures during times of pandemic should also means that it is also crucial to make sure that political transition through the election occurred.

Sharing the same idea, Dr Balaz Szantos from Thailand’s Chulalongkorn University said it is a tough year to hold a national election, but it’s hard to postpone such an important event, highlighting Vietnam’s efforts in conducting countermeasures for the elections.

Vietnam’s election body made all preparations to conduct the most important elections in an open, safe and transparent way despite Covid-19, Veeramalla Anjaiah, a senior research fellow at the Centre for Southeast Asian Studies in Jakarta and a senior journalist, told VNA that:

“Though Vietnam follows the one-party system, the election will not be unanimous and people have the power to reject any candidate,” he added.

He noted that the most laudable thing about the election will be a high representation of women candidates. At least 393 female candidates or 45.3% are competing in the elections in addition that there are 185 candidates are from ethnic minority groups.

He proposed Vietnam pay attention to administrative reforms, focusing on training and re-training the labor force, addressing bottlenecks on infrastructure, and stepping up the anti-corruption fight. 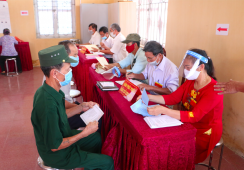