Vietnam’s rice exports on track to achieve US$3.3 billion

There has been progressing in Vietnam’s rice export as it has matched the national strategy for the diversification of rice export markets.

Vietnam’s agricultural sector is on track to realize the goal of exporting 6.3 million tons of rice in 2022 and earning a turnover of US$3.3 billion, according to the Import-Export Department under the Ministry of Industry and Trade.

During the first six months of 2022, rice was among Vietnam’s 28 key export staples with a turnover of $1.72 billion, equivalent to an export volume of 3.5 million tons.

Deputy Director of the Import-Export Department Tran Thanh Hai said rice prices have been on the upward trend during the first half of 2022, standing at US$420 per ton for 5% broken rice.

“Countries are turning to rice from Asian countries due to the impacts of the Russia-Ukraine conflict,” Hai said.

Meanwhile, the Philippines continued to be Vietnam’s largest rice buyer, representing 50% of total exports, while China, African countries, and Cuba were also among major buyers during the first half of 2022.

According to exports, ongoing disruption in the supply chain of grains would lead to a surge in prices of rice in Asia, in turn putting Vietnamese rice in a favorable position.

“Floods in China and low rice reserves in the Philippines are spurring up the demand,” Thanh said.

In addition to traditional markets, Vietnamese rice has been increasing its presence in the US and European markets, especially in the latter thanks to the entry into force of the EU-Vietnam Free Trade Agreement (EVFTA).

“Despite high transportation costs, Vietnamese rice continues to be in the competitive price range in the EU market, thanks to preferential treatment from the EVFTA,” said the Head of the Business Department at the Dai Duong Xanh Import-Export Trading Company Vu Thi Hue.

“EU has emerged as a key market for Vietnamese rice since the deal became effective last August,” she noted.

Hai from the trade ministry, however, said consistency in quality would be the decisive factor for Vietnamese rice to penetrate the EU market.

Vietnam’s trade counselor in the UK Nguyen Canh Cuong said Vietnam currently is the 15th largest rice exporter to the UK with a modest market share of 0.42%.

“The figure could improve in the future, thanks to a large Vietnamese community of 100,000 and the impacts from the UK-Vietnam Free Trade Agreement (UKVFTA),” Cuong said.

Meanwhile, Vice Minister of Agricultural and Rural Development Phung Duc Tien said the ministry is working with provinces/cities in building brands for Vietnamese rice, along with efforts to promote a complete value chain for rice production.

“Rising product quality to meet requirements on rules of origins are necessary for Vietnamese rice to take full advantage of free trade agreements that Vietnam is a part of, eventually realizing the export target of $3.3 billion set for this year,” Tien said. 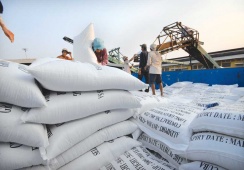