It is estimated that 27,000 people in six provinces of Vietnam will benefit from the project’s interventions, 70% of them are elderly.

The World Bank (WB) and partners on September 29 launched a project aiming to reduce economic and health vulnerability of older persons in Vietnam, under a US$2.75-million grant.

The non-refundable aid is funded by the Japanese government through the Japan Social Development Fund, administered by the WB.

Implemented by HelpAge International in collaboration with Association of the Elderly in Vietnam, the project will support the scale up of a community-based model for elderly care that promotes economically productive, healthy, and active ageing.

It is estimated that 27,000 people in six provinces of Vietnam will benefit from the project’s interventions, 70% of them are elderly.

“As one of the most rapidly aging countries in the world which will see the 65+ age group increase by 2.5 times by 2050, Vietnam needs a different approach to make health and social care systems fit for a growing older population,” said Carolyn Turk, the WB Country Director for Vietnam.

“We are pleased to support Vietnam in putting in place innovative, cost-effective and affordable interventions to provide long-term senior care,” the country director added.

A core activity of the project is to expand the Intergenerational Self-Help Club (ISHC) network through building at least 180 new clubs.

This model, first implemented in Vietnam in 200ưhose its effectiveness has been recognized by the government and included in national policies, adopts a holistic approach to meet the multiple needs of older persons.

These self-managed clubs, which host 50-70 members, runs a variety of inter-generational activities to help members boost incomes, improve physical and mental wellbeing, and know their rights.

Through a network of volunteers, also offers homecare services who are largely housebound including social care, personal care and related care.

“The model, by its name, is bringing generations together, closing the gap of age differences. More importantly, with the “self-help” characteristic the model helps community to help themselves in terms of social bonding, income security or health and care,” said Takaya Shimizu, first secretary of Japan Embassy to Vietnam.

Some 3,500 ISHCs have been established covering 61 out of the 63 provinces in Vietnam so far; however, quality and coverage varies.

The innovation of this project, which will run until September 2024, is that it will help fill some of these gaps and also facilitate better linkage with State service providers. 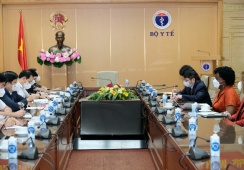