The Hanoitimes - The every-five-year political event will select new leadership of the Party and discuss socio-economic strategies in the next term.

8:00am Tuesday [January 26], the Communist Party of Vietnam (CPV) convenes the 13th Congress today [January 26] in Hanoi with the participation of 1,587 delegates who represent nearly 5.2 million party members nationwide.

The week-long event will be broadcast live on the state-run Vietnam Television (VTV).

At the opening session, the CPV’s Secretary General and State President Nguyen Phu Trong presents Assessment Report on the Implementation of the 12th Congress term (2016-20).

The every-five-year political event, which is the 13th congress since the Communist Party’s establishment in 1930, will last until February 2 of mostly closed door meetings setting the socio-economic course for Vietnam over the next five years.

With this regard, the congress is scheduled to elect the CPV’s Central Committee of 200 members, including 20 alternate representatives.

Apart from personnel matters that is said to consider qualifications over structure and virtues over talents, the 13th CPV Congress will also debate and approve a few key documents such as the political report and the socio-economic strategy.

Regarding participants, this congress marks the highest number of delegates, up 80 representatives from the previous gathering. The total number includes 15 overseas delegates who was selected by the Politburo, the country’s highest body.

Besides official delegates, former members of the CPV’s Central Committee from the 3rd tenure to the 12th tenure, a number of Vietnamese Heroic Mothers, religious dignitaries, intellectuals, artists, and youth among others are invited to attend the opening and closing ceremonies of the congress.

Congress attendees were subjected to rigorous coronavirus prevention screenings, and were all tested twice for the virus several days ahead of the gathering.

According to the health ministry, around 10,000 people have been tested in connection with the congress.

In terms of security, Major General To An Xo, the chief of staff of the Ministry of Public Security, said there have a number of security scenarios ranging from cybersecurity to activities against terrorism and social disorder to ensure the safety for the congress.

To ensure smooth traffic for the congress, Hanoi’s police ban a number of roads leading to the National Convention Center – the venue for the sessions – and time slots for vehicle restrictions which fall at 6:30-8:30am, 10:30-2:00pm, and 4:00-6:30pm.

Roughly 500 newsmen of 191 domestic news agencies and more than 60 reporters of 26 international media outlets have registered to provide widespread coverage of the congress.

Due to Covid-19, nearly 100 foreign correspondents have registered to virtually make coverage of the congress. 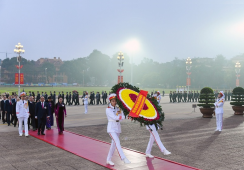 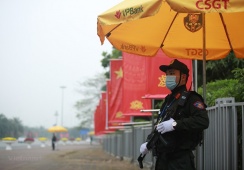 Security tightened in the first day of Party National Congress Results of the first day of National Congress